Celtic head to the Mestalla Stadium on Thursday night for the Europa League round of leg.

The Hoops were comprehensively beaten 2-0 in the first leg at Parkhead, thanks to goals from Denis Cheryshev and Ruben Sobrino.

Elimination from the Europa League is nearly a certainty for Celtic but Brendan Rodgers’ men will try to give everything to advance to the round of 16.

Jozo Simunovic missed the weekend’s win at Kilmarnock but could be back in the squad for Thursday’s game. Kieran Tierney will miss the trip to Valencia, however, he is likely to return against Motherwell.

Bain is Celtic’s no.1 now and he should start against Valencia on Thursday.

Toljan has struggled in the last two games, yet he should keep his place in the team.

A rock at the back, Boyata will have his task cut out against the Valencia attackers.

Ajer did well alongside Boyata in the win over Kilmarnock. Rodgers could look to go with the same partnership on Thursday.

Hayes has done admirably well in a makeshift left-back role and could be given the nod ahead of Izaguirre against Valencia.

Brown struggled massively in the first leg against Valencia. However, he’ll be desperate to silence his naysayers by putting in a skipper’s performance at the Mestalla.

McGregor has built a strong partnership with Brown at the heart of the Celtic midfield. He keeps Celtic ticking with his creative passing and movement.

Forrest will look to give the Valencia defenders a tough time with his pace and directness. He is a certain starter for the Europa League game.

Christie has looked off the boil in the last few games, yet Rodgers should stick with him.

Sinclair has done well in the last few games but Valencia is a different ball game altogether. He’ll have to be at his best to hurt the Spanish opponents on Thursday.

Despite looking off-colour in the last couple of games, Rodgers should likely persist with Burke up front. 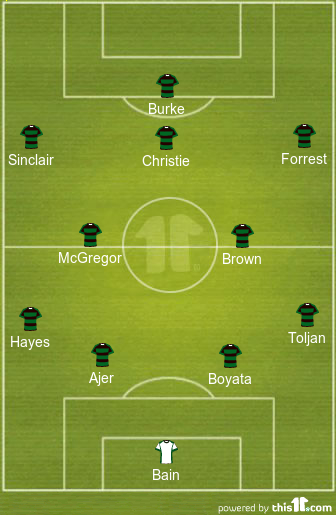