After getting past Rangers in a hostile Old Firm derby, Celtic would be aiming to keep their winning form going when they face St. Mirren at Paisley 2021 Stadium this Wednesday night.

Neil Lennon’s men are currently 13 points ahead in the title race, with less than a handful of games left to play. Hence, every win they get from here on would just stamp their authority on the trophy.

They are up against a St.Mirren side who also won at the weekend and are fighting for every point in the relegation battle. Thus, expect a potentially tough game for Celtic.

Dedryck Boyata and Kieran Tierney hobbled off against Rangers and it will be touch and go for them against St.Mirren. Ryan Christie is out for a few weeks.

Kouassi Eboue and Daniel Arzani are out for the season. Filip Benkovic didn’t recover to feature in the squad against Rangers and is also a doubt for this midweek.

The keeper is now the first-choice in the team and is expected to be in goal on Wednesday.

He did a very good job defensively against Rangers and should be in the team against St. Mirren.

With Boyata and Benkovic out, Simunovic should start in central defence on Wednesday.

He was one of the stars for Celtic against Rangers and is expected to partner Simunovic against St.Mirren.

With Tierney a doubt, we could see Toljan playing at left-back, a position where he can operate even though his preferred position is on the other side.

The captain was immense in the Derby and is a certain starter in the midfield this midweek.

He returned to full fitness before the international break and played well in the Old Firm derby. The Scotsman should partner Brown in central midfield.

He was left out of the last game in favour of Jonny Hayes but the latter didn’t do well. Hence, Sinclair should get his place back in the team.

He was on the bench against Rangers and should return as an attacking midfielder/support striker on Wednesday.

Scored the winner in the Old Firm derby and is a certain starter for Celtic in the last phase of this season.

The Frenchman took his goal well and did well up front against Rangers. Hence, we could see him doing the same on Wednesday. 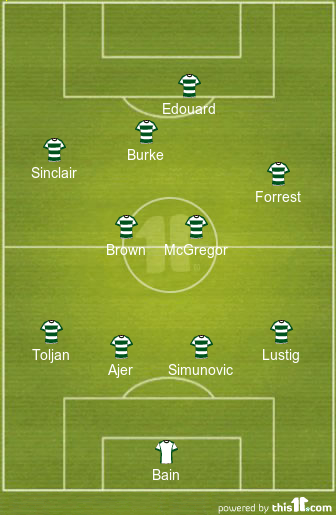