Celtic will aim to finish their Europa League group campaign with victory over RB Salzburg on Thursday.

The Hoops put themselves in pole position to claim second spot with a 1-0 victory over Rosenborg. And now the Scottish champions need just a point to qualify for the knockout stages of the Europa League.

A draw or a victory will be great for Celtic, but they will have their work cut out against a Salzburg side that has won all five of its Group B matches.

Dedryck Boyata could miss the crucial game against Red Bull Salzburg with a hamstring injury. But Kieran Tierney will be available for the European clash after missing the Kilmarnock victory with a slight groin problem.

Meanwhile, Eboue Kouassi and Daniel Arzani have been ruled out for the season.

Gordon is the first-choice in goal for Rodgers and should start the crucial game on Thursday against Red Bull Salzburg.

Lustig’s performances have been decent in the last few weeks for Celtic. He is set to retain his place in the team.

Simunovic has to be at the top of his game to keep Salzburg’s in-form striker Moanes Dabour at bay on Thursday.

Benkovic has been brilliant at the heart of the Celtic defence and deserves to start against Salzburg.

Tierney is an attacking left-back who will try to test the Salzburg defence every time he gets a chance. A certain starter.

For such a big game, experience will be key and Scott Brown should provide exactly that. A combative midfielder, he’ll have to lead the team from the front against Salzburg.

McGregor has been excellent in central midfield, showing his creativity and vision to split open the opposition.

Christie is Celtic’s in-form player and based on his current form, he simply cannot be dropped. A definite starter for the Europa League game.

A big game player, Rogic’s creativity would be required to unlock Salzburg’s rearguard on Thursday.

With his explosive pace, movement and unpredictability, Forrest could give the Salzburg defenders a torrid time at Celtic Park.

Edouard could again get the nod ahead of Griffiths to lead Celtic’s attack. The Frenchman will look to get on the score-sheet and guide the Hoops to the knockout stages of the Europa League. 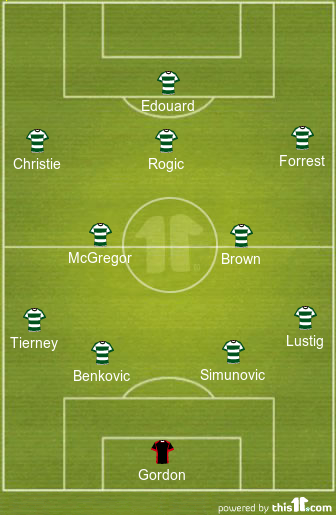