After thrashing AIK in Sweden to qualify for the Europa League group-stage, a buoyed Celtic will be aiming to maintain their good start to the season when they face arch-rivals Rangers at the Ibrox in the season’s first Old Firm Derby.

Neil Lennon’s men are at the top of the table after winning all of their league games so far. They are going to face a Gers team that has done the same and are only behind due to goal difference.

We can expect this game to be a feisty one.

Kristoffer Ajer has a groin strain that should rule him out for this game. Odsonne Edouard had a cramp after the game on Thursday and is a doubt.

Scott Bain is a long-term absentee who will come back in October. Tom Rogic has no return date.

The former Southampton man is the team’s number one goalkeeper as of now. He should be in goal for Sunday’s game.

With Ajer out for this game, new signing Bauer could get his first start in a Celtic on Sunday.

The summer signing is settling into the team well and is fast becoming one of the undroppable players in the team.

Bitton has done well at the back in the past two games. He should keep his place for the game on Sunday.

In past couple of weeks, Mbombo has looked like the player Celtic hoped for when they signed him in the summer. He is almost a certain starter against Rangers.

The captain always loves a game against Rangers. He must be gunning to play on Sunday and get one over his fiercest rivals.

McGregor could be an important player for Celtic in a game that is expected to be high on speed and transition.

Forrest continued his good start to the season by scoring on Thursday. He is a certain starter for the game on Sunday.

Christie has been doing well in the attacking midfield/winger role behind the striker. He should keep his place in the team for this weekend’s game.

The youngster has done well in the games he has played so far this season. He should start on the left wing against Rangers.

With Edouard a doubt, Bayo could get a chance to lead the line on Sunday. 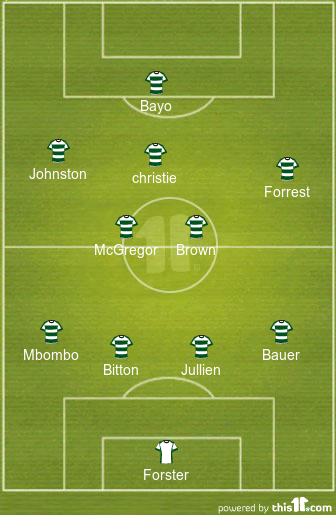