Celtic welcome arch-rivals Rangers at Parkhead on Sunday in what is expected to be a mouthwatering clash between two Glasgow giants.

Victory over St. Mirren on Boxing Day ensured the Hoops maintained a five-point advantage, with Rangers holding a game in hand as both teams prepare for their final game before the winter break.

Neil Lennon’s Celtic have won both of this season’s Old Firm clashes but were extremely fortunate to emerge victorious from the Scottish League Cup final earlier this month. A win for Lennon’s side will give them massive impetus ahead of the second half of the campaign.

Hatem Abd Elhamed and Mohamed Elyounoussi have been ruled out of Sunday’s game. Jonny Hayes will also miss out.

Forster has been in excellent form for Celtic this season and is expected to retain his place in goal.

Frimpong has impressed with his displays down the right, belying his tender age. He’s a certain starter on Sunday.

The Frenchman has been a standout performer at the back for Celtic this season. He will need to be at his best to keep the Rangers forwards at bay.

Alongside Jullien at the back, Ajer has looked solid. He should find himself in the starting XI once again.

With Boli-Bolingoli not being at his best since returning from injury, Lennon could go with Greg Taylor at left-back.

McGregor has been fantastic alongside Brown in the middle of the park and should retain his place in the team.

Christie has been an influential player for the Hoops this season, proving his worth with 10 goals and 8 assists in the league. He’ll start on the right flank.

Lennon could make a big change by bringing in Rogic for Ntcham in the no.10 role. The Australian possesses the killer pass in his locker to carve open defences and Celtic will rely on him to create chances.

Forrest hasn’t been effective down the left flank, yet a goal against St. Mirren would have given him some confidence ahead of the massive game on Sunday.

One of the scorers in Celtic’s win over Rangers at Ibrox earlier this season, Ntcham will be expected to play a key role once more at Celtic Park. 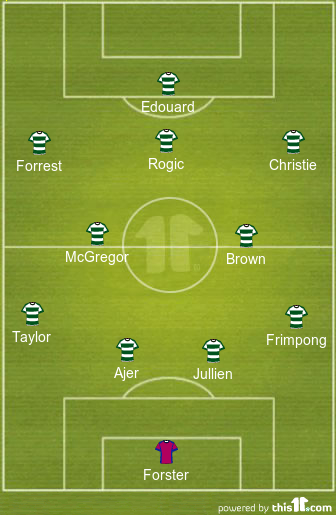