Celtic will be aiming to further stamp their authority on the title race when they face Rangers at Parkhead this Sunday afternoon. Currently, the Hoops are 10 points ahead of their rivals at the top of the Premiership table, with less than a handful of games remaining.

In their respective previous games, Neil Lennon’s men just about got the better of Dundee, while Steven Gerrard’s side dropped points at home against Kilmarnock.

But this is the Old Firm derby where form goes out of the window, especially when the game is just after an international break. Hence, there is no upper hand for Celtic, even though they look better on paper.

Kieran Tierney was injured but is expected to be fit for this game. Ryan Christie is sidelined with a hamstring injury and could take a weeks to recover.

Oliver Ntcham is touch and for this game. Daniel Arzani and Kouassi Eboue are out for the season. Leigh Griffiths is expected to return to training by the end of this week or next.

Kept another clean sheet last time around and is without doubt Celtic’s first-choice keeper now.

Jeremy Toljan can struggle defensively, hence, the experience of Lustig could be a better option for a game of this magnitude.

The Belgian international has recovered from his injury and is in line to start on Sunday.

Ajer has been confident and assured at the back in the few weeks. Hence, he is certain to partner Boyata.

The Scotsman had some injury problems but he is totally expected to be fit for this game.

The captain in central midfield for the Old Firm derby is an automatic choice. He would be up for it.

Came back from injury and played against Dundee. The Scottish international is expected to partner Brown in the midfield on Sunday.

He regained some of his lost touch against Dundee and should build on that in the upcoming game.

He led the line last time around and scored the winner. However, the Frenchman can play the withdrawn support role behind Oliver Burke, because Mikey Johnston at number 10 hasn’t really worked for the Hoops.

He is a certain starter on the right wing. The Scotsman would be aiming to cause trouble to the Rangers defenders.

The loanee from West Brom should lead the line on Sunday. His movement can trouble a rather fragile Rangers back-line. 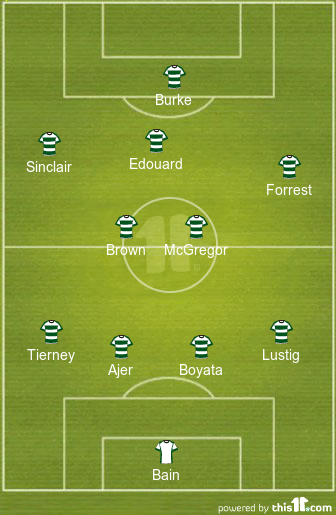