Arch-rivals Celtic and Rangers cross swords in the Scottish League Cup final on Sunday at the Hampden Park as the pair battle it out for the first silverware of the season.

Scott Brown’s dramatic injury-time strike gave the Hoops a 2-1 win over Hamilton on Wednesday, which moved Neil Lennon’s side two points clear of Rangers at the top of the Scottish Premiership. Rangers, meanwhile, threw away a two-goal lead at Aberdeen to end up with a draw.

However, both teams will be pumped up to give their best and win the Scottish League Cup at the weekend.

Odsonne Edouard was once again absent from Celtic’s matchday squad against Hamilton and remains touch and go for the final.

Greg Taylor is ineligible to face Rangers after featuring for Kilmarnock in the competition back in August. But Lennon confirmed Jonny Hayes and Mohamed Elyounoussi will train ahead of the cup final.

Forster will have to be at the top of his game to help the Hoops win the first silverware of the season.

Frimpong came off the bench against Hamilton but could get the nod ahead of Bauer at right-back on Sunday.

Jullien will have to be at his best to stop the in-form Alfredo Morelos on Sunday.

Ajer has been a regular fixture since the start of the season and needs to keep things tight at the back.

With Greg Taylor suspended, Jonny Hayes should get the nod at left-back.

Big players make the difference in big games and Brown has been doing that for Celtic for a long time. He’ll be looking to make an impact against the Gers on Sunday.

Due to his burst of pace, dribbling skills and direct approach, Forrest is always a tricky player to deal with. He will look to get the better of the Rangers right-back.

Rogic was an unused substitute against Hamilton but going by his big-game performances, he should start in the number 10 role at the Hampden Park.

The in-form Christie grabbed another goal in the 2-1 victory over Hamilton. Lennon will expect a big performance from the Scotsman on Sunday.

Edouard’s involvement on Sunday will increase Celtic’s chances of winning. The Frenchman found the back of the net the last time the two Glasgow teams met in the Scottish Premiership. If available, he would definitely start. 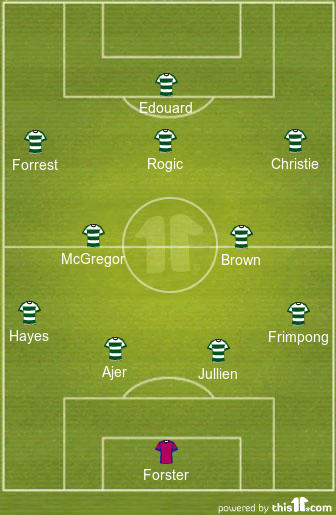