Predicted Celtic line-up to face Motherwell in the Scottish Premiership

Celtic welcome Motherwell to the Parkhead as they look to bounce back to winning ways in the Scottish Premiership.

The Hoops suffered a 2-0 defeat at Hibernian that saw them relinquish the top spot and slide down to third place in the table.

With a game in hand, Brendan Rodgers’ Celtic will look to get back on the top of the pile by beating Motherwell, who head into Wednesday’s fixture on the back of a 2-1 victory at St. Johnstone.

Ryan Christie remains a doubt after he was stretchered off against RB Salzburg in the Europa League.

Kieran Tierney and Tom Rogic missed the 2-0 defeat at Hibernian with injuries and are also doubtful for Wednesday’s game. Mikael Lustig, meanwhile, could be back after sitting out of Sunday’s game.

Dedryck Boyata and Nir Bitton remain sidelined, while Eboue Kouassi and Daniel Arzani have been ruled out for the season.

Gordon will look to keep a clean sheet against Motherwell after conceding two at Hibernian.

With Lustig a doubt, Ajer could get another shot at right-back.

Simunovic has started getting a run in the team following Boyata’s injury. He needs to grab those opportunities in order to nail down a regular place in the team.

Benkovic has been a pillar at the back for the Hoops. He remains a certain starter on Wednesday.

Izaguirre has to be considered desperately unlucky to have the best left-back in Scotland as his teammate. The Honduran, however, will likely start against Motherwell as Tierney remains doubtful.

Brown has to put in a big performance and lead the team from the front.

Ntcham adds energy and steel to the Celtic midfield. Alongside Brown in the engine room, the Frenchman is likely to start.

Forrest adds a lot of pace and intensity to Celtic’s attack. He also has the ability to slip in incisive passes in the final third.

Given the form he is in, McGregor is certainly one of the first names on Rodgers’ teamsheet.

Sinclair was poor in the defeat at Hibernian. He’ll look to redeem himself against Motherwell on Wednesday.

The Bhoys don’t have another striker currently available to them due to Griffiths’ break from football, so Edouard might be forced to play through his poor form. 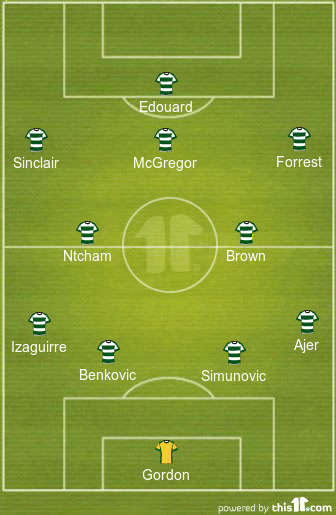