Celtic will welcome Motherwell at the Parkhead on Sunday looking to extend an 8-point lead at the top of the Scottish Premiership table.

The Hoops were dumped out of the Europa League Round of 32 on Thursday by Valencia. Brendan Rodgers will expect a reaction from his boys on Sunday against a high-flying Motherwell side, who have won six consecutive league games.

Motherwell come into this game off the back of a 2-1 victory over Hearts.

Rodgers could welcome back Kieran Tierney to the squad against Motherwell on Sunday.

Meanwhile, Brown will serve a one-game suspension after being sent off in the win at Kilmarnock.

Bain will continue guarding the goal for Celtic after not conceding a single domestic goal this year.

After a couple of really poor performances for Toljan, Rodgers could recall Lustig in the starting XI.

A rock at the back, Boyata will have his task cut out against the Motherwell attackers.

Simunovic could be given the nod ahead of Ajer to partner Boyata in central defence on Sunday.

Hayes has done admirably well in a makeshift left-back role and should keep his place against Motherwell.

There won’t be a better time to hand a start to Nir Bitton, who has managed just three substitute league appearances since recovering from a long-term injury problem.

Intelligent and a classy operator of the ball, McGregor will look to perform his duties and guide the Hoops to another league victory.

Forrest will look to terrify the Motherwell defenders with his pace and directness. He is a certain starter for the weekend’s game.

Christie’s form has dipped in the last few games, yet Rodgers should stick with him.

Sinclair will have to be at the top of his game to hurt Motherwell. He will start on the left wing.

Against a well-drilled Motherwell side, Rodgers could prefer Edouard ahead of Burke to lead the Celtic attack. 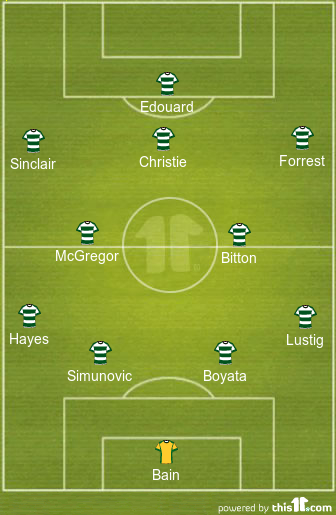