Celtic will be aiming to get one step closer to the Scottish Premiership title when they face Livingston at Celtic Park this Saturday. They got the better of St Mirren to remain 13 points clear at the top, with only six games to go.

Hence, the Hoops can claim the title if they win and the Gers lose this weekend. However, Livingston won’t be easy opponents because they are a defensively resolute side. Thus, expect a closely-fought contest.

Dedryck Boyata has a hamstring problem and may have played his last game of this season. Kieran Tierney missed the previous game but he would be okay to at least feature in the squad this weekend.

He kept another clean sheet in the previous game and remains as the first-choice keeper in the team.

Lustig has been doing well in the past few games and is expected to be in the team for the remaining games.

Given Boyata’s injury problem, Simunovic would be in the team on Saturday.

Ajer continues to be solid at the back and should be the first-choice centre-back in the team.

With Tierney touch and go for this game, Izaguirre, who played against St Mirren, should start.

The captain is playing well these days and would be in the line-up for the next game.

McGregor created loads of chances from the midfield against St Mirren and was very influential. Expect him to be in the XI for this weekend’s game.

He started against St Mirren and scored, hence, the PSG loanee might get another chance to shine in front of the home fans.

With Ntcham struggling for form since coming back from injury, Edouard might get a nod in attacking midfield/support striker role.

Forrest was the match-winner in the Old Firm derby and continues to be a key player for the Hoops. Expect him to start this weekend.

The West Brom loanee has been slightly off the boil lately but should continue to lead the line this weekend. 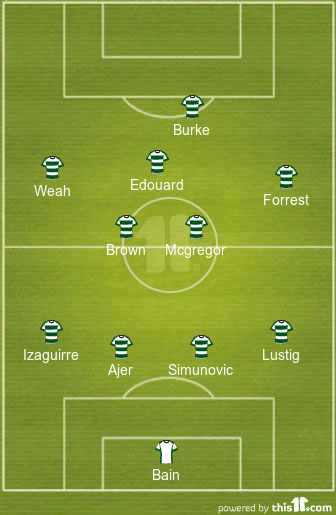