Celtic will hope to keep their good start in the Europa League going when they face Italian side Lazio at the Parkhead on Thursday in matchday three of the group-stage.

The Hoops returned to winning ways over the weekend by thumping Ross County and getting back to the top of the league table. They are also leading the group table in the Europa League, and a win on Thursday would further enhance their chances of knockout qualification.

However, Lazio won’t be easy opponents, bearing in mind the quality they possess from back to front. Expect a close contest.

Jozo Simunovic is out till January due to operating on the knee. Leigh Griffiths and Mikey Johnston continue to be doubts as they recover from niggling injuries.

The former Southampton man is Celtic’s first-choice keeper and should be the case on Thursday as well.

The teenager made a memorable debut over the weekend. Lennon might stick with at right-back for this game.

Jullien has done well generally in the past few weeks. He is now the first-choice centre-back in this team.

He is one of the first names on the team sheet these days, whether it be playing at right-back or in central defence.

The left-back has settled down well and is performing at a higher level. He is certain to start on Thursday.

The captain has been in and out of form in the past few weeks. He needs to bring his A game in order to control midfield proceedings against Lazio.

McGregor would hope to dominate midfield with the ball at his feet. There are no doubts regarding him starting on Thursday.

After a slight stutter in form, Forrest was back to his usual self over the weekend. He is certain to start against Lazio.

He is banned for two more league games after getting a red card against Livingston. However, he is eligible to start in this Europa League game.

The on-loan winger was at his devastating best against Ross County. He would hope to repeat that on Thursday.

The Frenchman is the leading man in this team. He is certain to lead the Celtic line against Lazio. 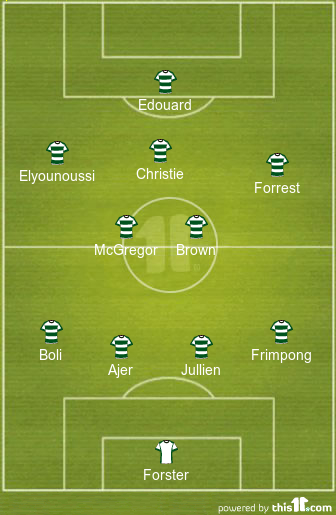