Holders Celtic travel to Hampden Park to face Hibernian in the Scottish League Cup semi-final on Saturday in an all green affair.

The Hoops are on a great run of form, having won four games on a bounce in all competitions. They’ll head into Saturday’s contest off the back of Wednesday’s 2-0 success over St. Mirren in the Scottish Premiership.

But Neil Lennon’s side must be wary of Hibernian, who managed a respectable 1-1 draw a few weeks ago at Easter Road.

Scott Brown came off injured in the second half of Celtic’s 2-0 win at home to St. Mirren and remains a doubt against Hibernian.

Vakoun Issouf Bayo may require a knee surgery that could keep him out for six weeks. He’ll join the likes of Jozo Simunovic and Mikey Johnston on the sidelines, while Leigh Griffiths still lacks fitness.

As it is the Scottish League Cup, Gordon is expected to replace Forster between the sticks on Saturday.

Frimpong was given a night’s rest against St. Mirren in midweek but he is expected to walk back straight into Lennon’s starting XI at the weekend.

Jullien is starting to live up to the expectations of the fans and he is expected to keep his place in the team against Hibs.

Just like Frimpong, Bolingoli-Mbombo was provided with a rest on Wednesday but he’ll return to the starting XI for the League Cup semi-finals.

With Brown a doubt, Ntcham could replace him in the middle of the park. The Frenchman has done well this season and will look to help Celtic qualify for the League Cup final.

Partnering Ntcham in central midfield will be McGregor, who has been a permanent fixture for Lennon’s side since the start of the season.

Elyounoussi is developing into a massive player for the Hoops. He bagged his fourth league goal of the season on Wednesday which should make him a certainty to start against Hibernian.

Rogic is the creative presence who will look to link up with players around him to open Hibernian up at Hampden Park.

Lennon could look to freshen up his attack a bit and give Morgan a chance on the right flank on Saturday.

With Bayo expected to be out for six weeks and Griffiths not yet fully fit, Edouard remains Celtic’s only striking option. The red-hot Frenchman should lead the team’s attack once again. 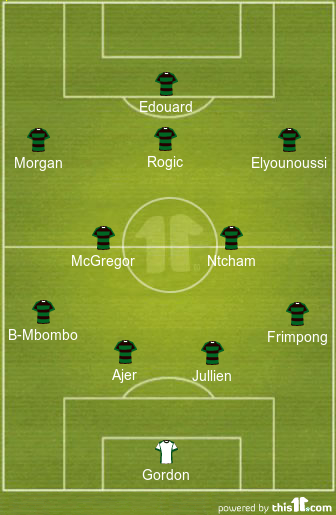