Celtic would be aiming to take one step closer to the Premiership title when they face Hibernian at Easter Road this Sunday. The Hoops are currently 11 points ahead at the top of the table, with five games to play.

Hence, even if second-placed Rangers win all of their remaining games, including the Old Firm derby, Neil Lennon’s men require two more wins in other four games to confirm the title. All in all, the Parkhead-based side have it wrapped up.

This is the weekend of second phase games here and Celtic would be looking to make a winning start. They are facing a Hibernian side who are fifth in the table and are in decent form. Therefore, it won’t be easy for the Hoops on Sunday.

Ryan Christie suffered a nasty facial injury when he was playing against Aberdeen in the Scottish Cup semi-final. He would be in grave doubt to feature this weekend.

Oliver Burke has a strain injury and he is certainly out for this game. Dedryck Boyata is out for the season. Vakoun Issouf Bayo’s hamstring injury will keep him out for the rest of the games this season.

He is their first-choice keeper now and should be in goal on Sunday.

His form has improved over the past few weeks. Hence, expect the Swede to start on Sunday.

In Boyata’s absence, Ajer seems to have taken up the mantle of getting everything organised at the back. He is a certain starter against Hibernian.

Amidst Boyata’s absence, Simunovic has quietly slotted in and is doing a good job alongside Ajer. The same partnership should be on the ground this Sunday.

Tierney is Celtic’s number one left-back now. He should be in the XI against Hibernian.

The captain has been doing well in central midfield of late. We can expect him to start at Easter Road this weekend.

The more the Scotsman plays, the more he would get his rhythm back. He was good against Aberdeen and should partner Brown for the upcoming league game.

The experienced Hayes has been in good form on the left wing. He deserves to keep his place in the XI.

With Christie and Burke not available for this game, we could see Edouard dropping slightly deeper to allow Timothy Weah to lead the line.

He is their first-choice right winger, who continues to have a tremendous season. The Scotsman is almost certain to start on Sunday.

We have seen signs from Weah that suggests that he can do a good job for the Hoops. The PSG loanee should lead the line, partly because of injuries to other attacking midfielders/support strikers, which would probably lead to Edouard playing slightly deeper. 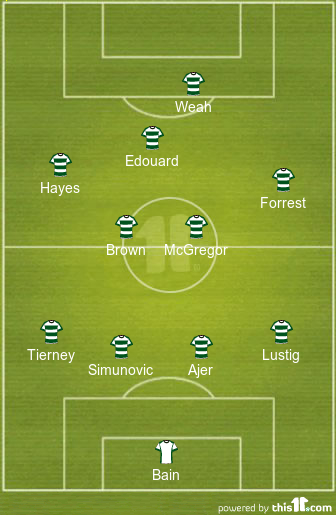