Celtic’s ambitions of winning the domestic treble will be on the line when they face Hibernian in the Scottish Cup quarter-final this Saturday at Easter Road stadium.

Neil Lennon’s men are currently eight points ahead in the league and are favourites to retain the title. They have almost won the Scottish league, meaning the game this weekend is an important one to progress further in the other domestic competition.

The Hoops are up against a Hibernian side who have won their last four games in all competitions. Hence, expect a good game between the tournament favourites and an in-form team.

Callum McGregor and Ryan Christie wouldn’t feature this weekend, while Olivier Ntcham is being checked on a day-to-day basis. Filip Benkovic is also expected to return next month. Leigh Griffiths is out due to personal reasons. Tom Rogic will come back by mid-March.

He is their first-choice keeper now and is expected to be in goal on Saturday.

When compared to Mikael Lustig, new signing Toljan has done well in the past few games. The latter is in line to start against Hibernian.

The Belgian international has been solid in central defence and would be aiming to keep the in-form Hibernian attack at arm’s length.

With Benkovic out, expect to see Ajer continue slotting in at centre-back. The latter was a bit nervy against Hearts on Tuesday.

The star left-back is slowly improving his match fitness, which would bode well for the team in the upcoming games.

The captain will be aiming to lead his side through to the next round of this competition as they chase the domestic treble.

With injuries in the midfield, youngster Henderson may get another chance to impress the new manager.

Forrest has had a great season with the Hoops and he would be hoping for more of the same in the latter stages of this cup competition.

The loanee from West Brom would be more of a threat playing the support role for striker Odsonne Edouard.

His form has been decent in the past few games and the Celtic manager shouldn’t hesitate to field him this Saturday.

Scored the injury-time winner on Wednesday and continued his good form in the past two games. Expect him to lead the line against Hibernian. 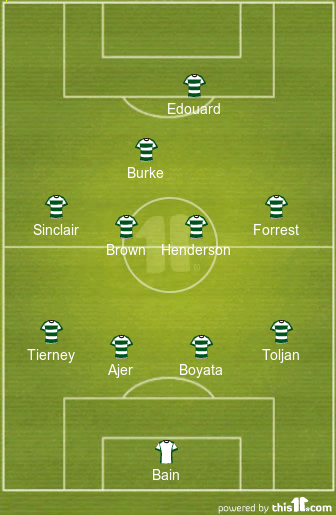