Scottish Premiership leaders and defending champions Celtic will be aiming to keep their league form going when they face Hearts away at Tynecastle stadium on Wednesday.

The Hoops’ European journey came to an end at the hands of Valencia, but they are well on course for a domestic treble. Brendan Rodgers’ men have already won the Scottish League Cup, are leading the league by eight points and are into the last-eight of the Scottish Cup.

They now face a Hearts side whose form has taken a sinewave route in the past month or so. The Jambos are currently fifth in the table.

For Celtic, this being an away game, could be tricky. Hence, they will have to be at their best on Wednesday.

Ryan Christie went off in the last game with a suspected hamstring injury, hence, he certainly wouldn’t play on Wednesday. Tom Rogic is out until mid-March. Filip Benkovic is another player who wouldn’t return this month. Oliver Ntcham is being checked on a day-to-day basis.

Scott Brown is back after serving the suspension at the weekend.

He would have been disappointed to concede his first league goal of 2019 on Sunday. Bain is their first-choice keeper now and should start on Wednesday.

Struggled at times on Sunday when called upon to defend one-on-one situations. Celtic fans would be hoping for better things in the upcoming games.

The Belgian is a solid presence at the back and is in line to keep his place for the remaining league games.

Ajer was absolutely fantastic against Motherwell. He is expected to keep his partnership with Boyata going.

Returned from injury in the last game and played 70 minutes to get the much-needed match fitness. He is expected to start on Wednesday and continue his recovery.

The captain was suspended for the previous game, but he should slot straight back into the line-up against Hearts.

The teenager controlled the midfield on Sunday and deserves to start on Wednesday.

He wasn’t at his best on Sunday but on the whole, the Scotsman has had a great season so far. Hence, he should keep his place on the right wing.

With Christie out, we could see Burke starting behind the striker.

His form has been up and down in the past few games. Despite that, Sinclair remains the first-choice left-winger in the team.

The Frenchman scored a brace on Sunday that would have helped his confidence. He is in line to lead the line on Wednesday. 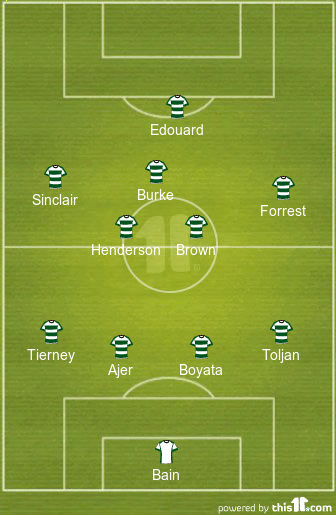