After being held by Aberdeen last week, Scottish Premiership leaders Celtic will be aiming to get back to winning ways when they face Dundee FC at Dens Park this Sunday.

The Hoops were strangled to a goalless draw by the Dons, leaving them eight points ahead at the top of the table, as they couldn’t capitalise on Rangers dropping points a day before.

This wekend, Neil Lennon’s men are up against a Dundee side, who are 11th in the table and fighting for survival in the league.

The Dees are yet to taste a home victory since the turn of the year, hence, Celtic would be licking their lips to get the three points. However, nothing can be taken for granted in football.

Tom Rogic is back in training and Lennon expects him to be a part of the squad after the international break. Ryan Christie is still a few weeks away from full recovery. Callum McGregor is expected to be available for this weekend’s game.

Filip Benkovic has made himself fit and ready for selection. Olivier Ntcham is on a day-to-day basis. Leigh Griffiths has been out due to personal reasons.

He is their first-choice keeper now, meaning he would be in goal for every league game.

The new signing is slowly getting exposed defensively while he makes runs forward. He needs to balance that out in order to get a regular run in the team. The German is expected to start on Sunday though.

The Belgian is the Celtic’s main centre-back and he continues to help the team out by keeping clean sheets. Boyata is in line to start against Dundee.

Even though Benkovic is back available, Ajer has done well in the past few weeks, alongside Boyata and that partnership should continue.

The exciting left-back would be aiming to get forward and trouble the Dundee defenders, while making those recovery runs when required.

The captain was a bit slack in midfield against Aberdeen. He would be hoping to improve on that this Sunday.

As mentioned above, he is expected to be back fit for this game and should start ahead of Nir Bitton, who was average at best against Aberdeen.

His form has been slightly up and down in the past few weeks. Celtic fans would be hoping he gets his early season consistency back for the next two months. The winger is almost certain to start on Sunday though.

Ewan Henderson has struggled to really create chances playing behind the striker, hence, we could see Edouard operating behind Oliver Burke and almost playing as a second striker.

Another player who needs to raise his game, or the manager may drop him soon. Sinclair must do well against Dundee.

His pace in behind the defensive line is always a threat. The loanee from West Brom should get more support in order to create more clear-cut chances in front of the goal. That should be on display against Dundee. 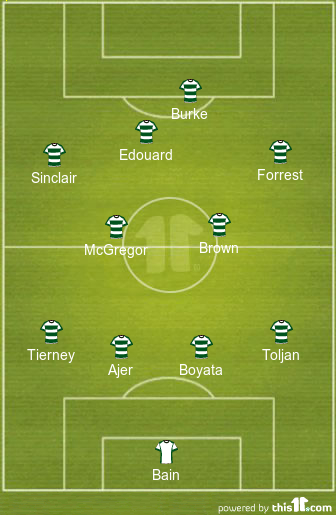