Predicted Celtic line-up to face Airdrie in the Scottish Cup

Celtic made the most of their break with a warm-weather trip to Dubai and are now all set to resume their campaign as they face Airdrie in the Scottish Cup fourth round on Saturday.

The Hoops will head into the encounter at Celtic Park as overwhelming favourites and aim to make light work of the League One side.

Airdrie, who are fifth in the League One table, will be eyeing an upset on Saturday as they look to dump Celtic out of the competition.

Kieran Tierney remains a massive doubt for the game, while Tom Rogic is away on international duty.

Gordon is Celtic’s undisputed No.1 in goal and he’ll keep his place in the team.

Ralston has performed very well when given a chance and deserves to start ahead of Lustig.

Boyata is undoubtedly Celtic’s best defender. The Belgian is a certain starter against Airdrie.

Having now fully recovered from a knee injury, Benkovic will partner Boyata at the heart of the Celtic defence.

With Tierney doubtful, Rodgers could hand Izaguirre a start at left-back.

Brown will look to be his usual self – protect the back four by breaking up attacks with his tough tackling and interception skills.

Calm and composed in possession, McGregor will look to dictate the tempo of the game alongside Brown in central midfield.

On the right, it’ll be none other than James Forrest, who can wreak havoc against Airdrie with his searing pace and dribbling skills.

Christie’s presence will be crucial for the Hoops on Saturday. With his creativity and movement, he’ll look to unlock the Airdrie defence.

Sinclair has improved in the last month or so but he needs to take his game to another level if he intends to keep his place in the team.

Read more: Celtic beating QPR to sign this PL outcast would add a lot of depth and strength to the Hoops squad

Edouard will be the one to lead Celtic’s attack on Saturday. 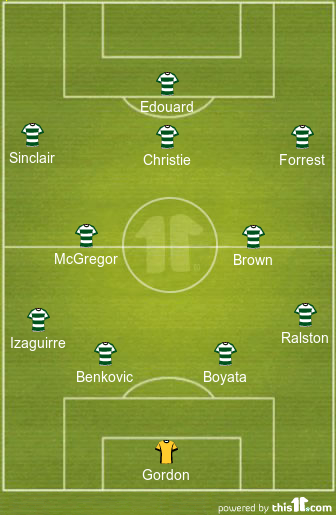