Celtic will be aiming to keep their commanding lead at the top of the Scottish league table when they face Aberdeen at Parkhead this Saturday. The Hoops are currently eight points ahead of second-placed Rangers and are in a commanding position.

Neil Lennon’s men are up against an Aberdeen side, who are third in the table and have been in decent enough form leading up to this game. Hence, expect an interesting encounter this weekend.

Callum McGregor, Ryan Christie and Tomas Rogic are out for several weeks with different injury issues. Filip Benkovic is back in training and it remains to be seen when the manager deploys him in the starting eleven. Leigh Griffiths is out due to personal reasons.

He is their first-choice keeper and is expected to start every league game.

Mikael Lustig started in the cup game last week but wasn’t comfortable. As a result, we could see Toljan getting his place back.

The Belgian has been a vital cog in the back-line for the Hoops. He is a certain starter for this team.

His partnership with Boyata has flourished in central defence. Lennon would be wanting more of the same from this duo.

He is the undisputed number one left-back in the team, who keeps on delivering top performances. The youngster should be in the line-up on Saturday.

The captain is an important figure in the midfield for the Hoops. His presence makes the team tick in the most important area of the field.

The 27-year-old did well alongside Brown in central midfield last week. That partnership should play more games together.

After being slightly out of form in February, Forrest was close to his best in the cup game last weekend. The right wing position is his own to lose.

Came off with an ankle knock against Hibernian but the issue wasn’t too serious. Hence, expect the loanee from West Brom to start against Aberdeen.

Sinclair was below-par once again last week. The 29-year-old is a first-choice on the left wing, but he needs to improve his performance level.

The game against Hibernian wasn’t his best. With Celtic short on options up front, the Frenchman must get better sooner than later. 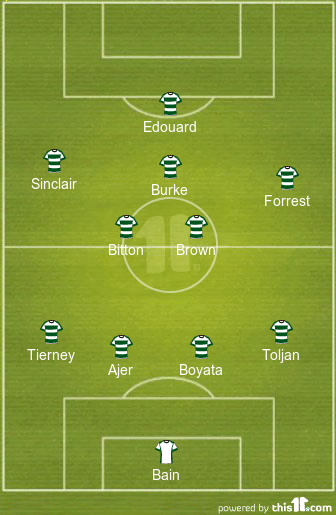