Celtic would be aiming to reach another cup final when they face Aberdeen in the semi-final of the Scottish Cup tomorrow at Hampden Park. Neil Lennon’s men haven’t been at their best in the league games of late but have managed to get the results.

They are very close to clinching the title, while they already have the Scottish League Cup in the bag. Hence, the domestic treble is in sights if they manage to get past Aberdeen tomorrow.

Dedryck Boyata is out for the season and may have played his last game for the Hoops. Oliver Burke is also suffering from a strain that could keep him out of this game.

Vakoun Issouf Bayo is out for the season after picking up a hamstring injury. Craig Gordon remains sidelined with an injury that has kept him out for long now.

He is their first-choice keeper now and should be in goal tomorrow.

The experience of Lustig could be key in such a big game. He has improved at right-back of late.

Ajer has been in good form at the back, be it alongside Boyata or others. He is almost certain to start tomorrow.

He did very well against Livingston last week and deserves to get a place in the team.

The high-profile Tierney is Celtic’s first-choice left-back and is almost certain to start there tomorrow.

The captain would be looking to lead by example in the midfield in such a big game.

The Scotsman should be selected in central midfield alongside Brown. He can be that link man between the midfield and attack.

He would be looking to create opportunities from the wide areas and also get into good positions in and around the opposition box.

He is back fit and played well against Livingston. Expect the Scotland international to start this game.

Since Scott Sinclair hasn’t been in great form, we could see Hayes starting on the left wing tomorrow.

The Frenchman has been in decent form of late. He should be leading the line in this crunch semi-final tie. 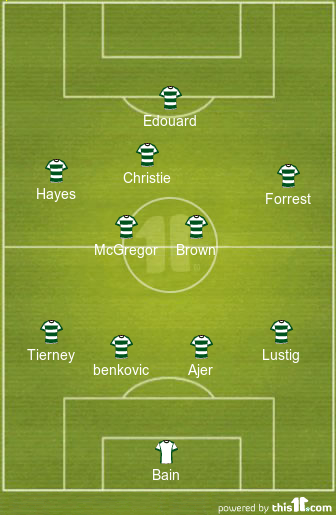