Predicted Arsenal line-up to face Wolves in the league

Arsenal would be aiming to keep their unbeaten run going when they face a slightly wobbly Wolves team at the Emirates Stadium this Sunday. The Gunners proved their worth when they faced Liverpool last week in an entertaining 1-1 draw. Unai Emery has made a difference in how the team is playing and responding to the calls of the manager.

On the other hand, Wolves are wobbling after an impressive start and are getting a reality check in the Premier League. They are on a run of losing three games on the spin and would be looking to put a stop on that when they visit north London on Sunday. Hence, it won’t be easy for the home team as Nuno Espirito Santo’s men are an awe-inspiring bunch.

Danny Welbeck suffered a horrible ankle injury during a Europa League game against Sporting. Therefore, he will be out for the foreseeable future. Stephan Lichtsteiner also had a hamstring problem on Thursday, while Nacho Monreal recovers from a similar injury. Mohamed Elneny is still out and may come back after the international break.

The German has taken over the first-choice role in the goalkeeping department. He has had to wait for that but for the way Emery wants his team to play, Leno is an ideal man between the sticks.

The Spaniard just got himself fit for the Liverpool game last week and was rested for the Europa game. Expect him to start on Sunday.

The youngster has been an impressive presence at the back for the Gunners. On current form, he should start most games.

The German was colossal against Liverpool last Saturday, hence, Emery might be tempted to continue with him alongside Holding.

Kolasinac came back from injury last week and did well against Jurgen Klopp’s men. He is almost certain to start again on Sunday.

The Uruguayan has been one of the impressive players in midfield. He should every game unless there is an injury issue.

The Swiss international got a game off for the Europa League. Hence, he is fresh enough to feature this weekend.

The Gabonese came off the bench earlier than expected against Sporting but he is almost certain to start on the left wing against Wolves.

Ozil got a game off on Thursday, probably to get a rest and be fresh to fire against the Old Gold.

On current form, Iwobi should be starting ahead of Henrikh Mkhitaryan. The latter has struggled to find his feet this season.

Read More: Opinion – Arsenal should hold onto this 33-year-old veteran amidst interest from Barcelona

The Frenchman scored a great goal against Liverpool to earn a deserved point last week. He is been in good form and Wolves defenders will be wary of him. 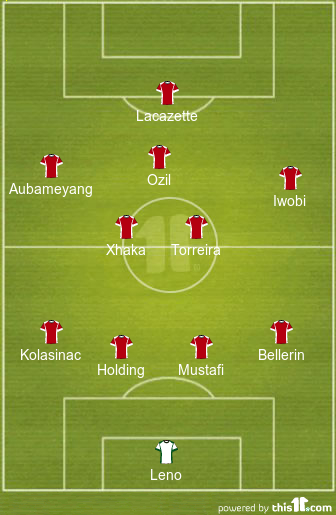