Predicted Arsenal line-up to face Sporting in the Europa League

Arsenal would be hoping to take a giant step towards qualifying for the knockout rounds of the Europa League when they face Sporting CP at the Emirates stadium this Thursday night. Unai Emery’s men have won three out of three group games so far, and a win this week would put them favourites to not just go through, but also top the group.

The Gunners went away and defeated the Portuguese side 1-0, which can act as an added boost to their confidence going into this game. They are boasting a 14-game unbeaten run, with an aim to make it 15 come Thursday night.

Nacho Monreal is a doubt for this game, same is the case with Sokratis. Mohamed Elneny is out and Laurent Koscielny is slowly returning to fitness after a long-term injury. The latter should be back in training by the end of this month.

Cech is now the second-choice keeper with Bernd Leno taking his opportunity with both hands in the league. The former should be starting this game.

Hector Bellerin was fit enough to play the full 90 minutes against Liverpool, however, Lichtsteiner is expected to take his position for Thursday.

The youngster has taken his chance with a aplomb. His performance level is increasing game by game. Started every Europa League game thus far, hence, we should see him for this match as well.

With Sokratis in doubt, Mustafi could partner Holding in central defence.

The Bosnian got fit in time for the Liverpool game and played well. He is expected to start on Thursday to gain more match fitness.

The youngster was suspended from the weekend’s game, therefore, he should be fresh to start against Sporting.

Ideally, Emery would have liked to rest the Uruguayan, however, with Elneny out due to injury, Torreira might partner Guendouzi in central midfield.

The Englishman scored the winner when these two teams met in Portugal. He would be hoping for more of the same come Thursday.

Ramsey has featured in Europa League games on a consistent basis this season. Expect him to start this week.

The youngster has been a real find for the Gunners this season. An academy product doing well is always good for the club.

The Gabonese could lead the line as Lacazette expected to get a rest. 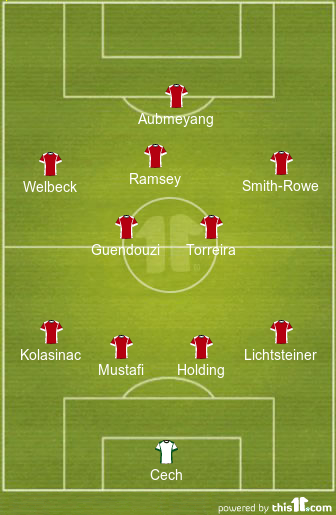