Arsenal will be keen to bounce back from their 2-2 draw against Crystal Palace on the weekend.

However, coach Unai Emery will be keen to strengthen the Gunners’ position in the Premier League and with an in-form Liverpool as opponents, he will most probably hand starts to the youngsters in the Round of 16 of the Carabao Cup on Wednesday night.

The Spanish coach is also expected to offer some playing time for stars returning from injuries. Arsenal won their last Carabao Cup fixture 5-0 against Nottingham Forest.

The former PSG boss will have all players available for the fixture, barring Reiss Nelson, who is suffering from a knee injury.

Martínez has started in Gunners 5-0 win and is likely to retain his spot ahead of Bernd Leno. Leno is expected to be rested as he has started in all Premier League games this season.

Arsenal’s first-choice full-back is expected to play ahead of Calum Chambers as boss Unai Emery must get him back in the Premier League. Bellerin is yet to make a single appearance in the league this season.

Shkodran Mustafi has fallen behind Sokratis Papastathopoulos and David Luiz for the starting XI in the Premier League but has played in the Europa League as well as in the last Carabao Cup win. He is expected to be in the first line.

The England defender is likely to start in his role ahead of Luiz and Sokratis because of lack of playing time in the Premier League.

Unai Emery is likely to start the Scottish international to give him more playing time.

Willock has gotten Premier League opportunities due to his performance in other Cup fixture. He is expected to in the starting XI.

The academy youngster is one of the hottest prospects in the Premier League. He had was chosen over Ainsley Maitland-Niles and is likely to retain his place in the starting XI with the latter’s discipline an issue so far.

Dani Ceballos has been the main architect of Arsenal and Unai Emery is likely to give him a second opportunity against Liverpool after the Spanish midfielder admitted he ran out of gas in his first encounter with the Reds.

The youngster has already impressed a lot with his performances this season and is expected to come in place of Nelson.

The new signing has been impressive for the Gunners this season and is likely to start in Emery’s starting XI. 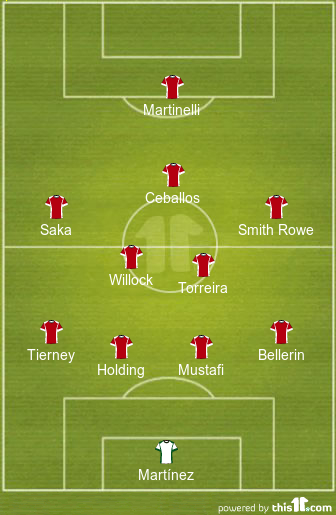 Experienced Sports Writer with a demonstrated history of working in the information technology and services industry.
Follow me on Linkedin