Predicted Watford line-up to face Southampton in the Premier League

Watford were beaten by Newcastle United last weekend. After making a superb start to their season, the Hornets seem to have lost their pace. Javi Gracia’s men have otherwise been in stellar form under his tenure.

They come up against Southampton in the league this weekend and will be aiming to pick up a win. The Saints have been in poor form and are on the back of a heavy beating from Manchester City last weekend.

Troy Deeney, Daryl Janmaat and Sebastian Prodl are all still out injured. Javi Gracia still has plenty of options to pick from and should field a strong side capable of coming away with the win.

Foster has been excellent in goal for the Hornets. He should keep his place.

Femenia has done well after coming into the side for Daryl Janmaat. He should continue at right-back.

Mariappa must once again lead the Hornets from the back.

Cathcart has been consistent this season. He has been a major influence in the defence.

His attacking input has reduced in the last few weeks but the Greek international is still a good defender.

The midfielder has stepped up his performances under Gracia and should receive a start.

Capoue’s driving runs will always be a massive threat for the Saints.

Hughes has thrived in a regular role under Javi Gracia this season. He must retain his spot on the right side of the midfield.

Pereyra has been in stunning form this season and has scored all sorts of goals. He should start this game.

He has done well after coming into the side. The Spaniard has scored one goal as well. 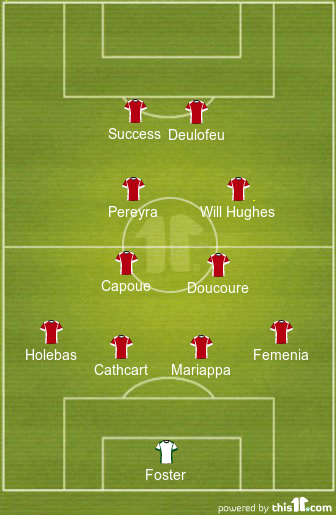