Watford’s last Premier League game was an inspired performance when they beat a strong Everton side 1-0. They also beat QPR in the FA Cup by the same 1-0 margin.

They now face a trip to Cardiff City where they have to try and overcome a rather upbeat Bluebirds side. Watford to win this fixture to keep the pressure on 7th-placed Wolves, who are currently 2 points ahead of the Hornets.

Sebastian Prodl and Kiko Femenia are doubts for this game but are in the final stages of their recovery process and could be back soon. Roberto Pereyra is another who has been heavily missed and while he is very close to a return, this match could come too soon for the Argentinian.

Issac Success’ hamstring problem has ruled him out of contention for this Premier League game while wing-back Jose Holebas is serving his two-match ban for picking up 10 yellow cards, the 10th one of which he picked up in their last game against Everton.

The former Manchester United man has been in fine form between the sticks for the Hornets this season and is a sure starter.

Kiko Femenia’s return from injury could spell bad news for the Dutchman, who must impress in this game to keep his place.

The Jamaican international has been a key player for Watford this season and he has really impressed as well during Prodl’s injury.

Very much the commander of this Hornets defence, he has played 25 games for them this season and even pitched in with 3 goals.

The suspension to veteran defender Jose Holebas means that the Italian defender could get a rare start in the Hornets XI.

The highly-rated Frenchman has been excellent for Watford this term and is one of the hottest properties in world football right now.

The Frenchman is an important part of the Watford attacking system and will keep his place in the middle of the park.

Hughes has shown his quality over the last couple of months and has nailed down the starting role which could be at risk after Pereyra’s return from injury.

Usually deployed on the other side, Sema has replaced the injured Pereyra on the left and done a very good job as well.

The former Barcelona academy product has been the ideal partner up front for Troy Deeney due to his movement and ability to read the play.

By far their biggest goal threat when Pereyra isn’t on the pitch, Deeney has to fire on all cylinders if the Hornets are to get 3 points from this game. 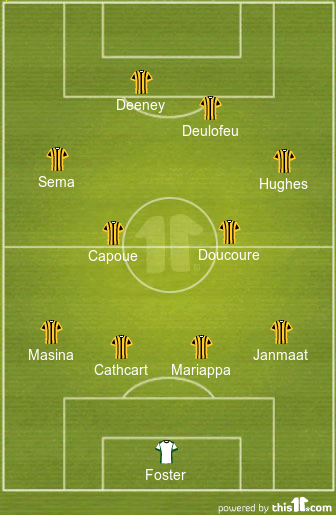