Watford were only able to manage a draw against Everton last week as Lucas Digne scored a late-freekick to level the matters in the dying moments. The Hornets have lost their pace in recent weeks after making a flying start to the season.

Javi Gracia’s side now entertain Cardiff City at Vicarage Road this weekend. The Bluebirds have shown better form after making a poor start and will pose a tough test for the Hornets. Gracia will surely need a win to cement their place in the top ten.

Etienne Capoue will not be able to feature given that he is still out suspended after picking up a red card two weeks ago. Will Hughes and Andre Gray too are major doubts ahead of the matchday and will most likely miss out. Long-term absentee Daryl Janmaat is still a long way from full recovery.

Denied Gylfi Sigurdsson from the spot in the last game and did a brilliant job. He will surely keep his place.

Femenia has looked a major threat down the right flank. He’s good on the ball and takes on defenders well.

Defended well against Everton but looked sloppy at times. He should continue at the back.

Cathcart has been the Hornets’ most consistent defender this season. He will continue to partner Kabasele at the back.

Holebas has failed to provide the spark he gave in the early stages. He should keep his place at left-back though.

The Hornets’ most stable player in the squad will definitely start this game. He has been a vital cog for the team.

The youngster did very well in the absence of Capoue and should keep his place in the squad alongside Doucoure.

Deulofeu should return to the line-up in place of Ken Sema. The former Barcelona attacker is capable of troubling the Bluebirds with his directness.

Played a crucial role in winning the point for the Hornets against Everton last week. However, he hasn’t scored in a while.

Success has shown good pace and running but needs to be more clinical in front of the goal.

Read more: 40.7 passes per game, 85% success rate – This 6ft 2in giant is the marquee player who Watford need in January

Tends to link up well with his teammates but doesn’t have the venom in the final third. He will continue alongside Success and lead the line. 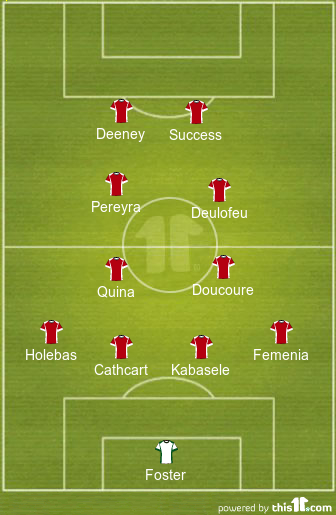