Rangers latest blow of the current season came in the recent Scottish Cup replay against Aberdeen which ended in a 2-0 defeat for the Gers after a highly lacklustre yet hard-fought 1-1 draw at the Ibrox.

Rangers’ next challenge in the Premiership comes against Kilmarnock, who they face on the weekend. They need to maintain the pace at the top with Celtic, who they are set to contest against in the next set of Premiership fixtures.

One of the key misses for this fixture is Gareth McAuley who is currently recovering from a hamstring injury that has kept him out for a duration. Eros Grezda and Graham Dorian’s are both expected back in the first-team setup in the coming weeks.

Matt Polster is a massive doubt for this crucial league tie as well while Jamie Murphy’s crucifer ligament injury is set to keep him out of contention for this tie and he is expected back only in late April.

The 37-year-old veteran has been a key player for Gers all season and his experience will be crucial for motivation.

The Englishman’s market value has skyrocketed this season as he has been performing at extremely high standards.

The young Englishman has been very good whenever his services have been called upon by Gerrard this season.

The 26-year-old is certainly the leader at the centre of defence and he will have be to be very good on the weekend to keep Killie out.

The Croatian has been used on the left-back role whenever he’s been available and he has impressed Gerrard as well.

The Scottish international is 27-years-old now but still does a job for the Gers in the middle of the park and he will be key.

The star winger has contributed heavily to the Gers’ season and has been at the heart of everything positive they have done.

The 23-year-old Finnish international has become a favourite under Gerrard and he is expected to keep his place in the XI.

Canadian international Arfield has scored some crucial goals for Gers this season and will have to be on top form.

The 22-year-old loanee from Liverpool has paid off Gerrard’s trust and has put it some encouraging displays in the league.

The 22-year-old has been an absolute beast up-front for Gers this season and his goals will be crucial going forward. 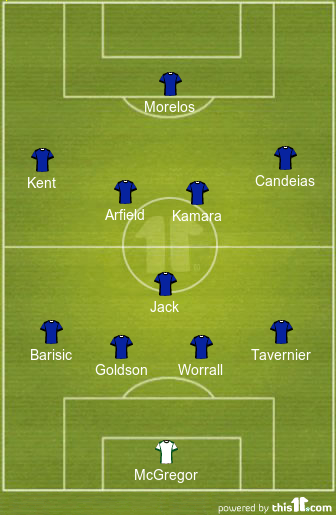