After playing out a stalemate in the Scottish Cup quarter-final against Aberdeen, Rangers would be aiming to keep their good league form going when they face Hibernian at Easter Road this Friday night.

Steven Gerrard’s men have a cup replay against Aberdeen next Tuesday but winning the league game and maintaining a positive form is key going into the business end of the season.

On Friday, the Gers will be up against a Hibernian team who are comfortably mid-table in the league and are not involved in Scottish Cup anymore. Hence, their sole focus would be on winning the remaining league games.

Thus, it won’t be easy for Rangers, who are currently eight points behind leaders Celtic.

Ryan Jack has picked up a foot injury following the Aberdeen game. The club is sweating over his fitness. He may miss the action on Friday. Andy Halliday featured in the squad of 18 on Sunday despite concerns over his groin. It remains to be seen whether he starts on Friday or not.

The veteran is the first-choice keeper in the team and is to be in goal on Friday.

The captain is expected to keep his place at right-back. He has been a fine attacking outlet with good crossing from the wide areas.

Gave away a penalty on Sunday but the former Brighton man has been one of better centre-backs in the team. He is expected to feature on Friday.

Scored the equaliser against Aberdeen and has been solid alongside Goldson in the heart of the Gers’ defence. The youngster should start on Friday.

He had a slight groin issue but was on the bench in the cup game. Expect him to start ahead of Borna Barisic against Hibernian.

Ryan Jack has some issues with his injury, hence, we could see McCrorie shielding the back-line on Friday.

The new signing has been an impressive presence in central midfield for the Gers. At this level, he is a certain starter in most games.

The former Burnley man was quiet in the game against Aberdeen. Gerrard would be hoping for more from him.

Candeias has been good in delivering good balls into the box from the right wing. His contribution in the final third is important to this team.

The loanee from Liverpool has been pretty good this season and is a regular start on the left wing.

The Colombian wasn’t at his best on Sunday but his recent form has been close to perfect. Rangers fans would be hoping for a goal or two from their star man this Friday. 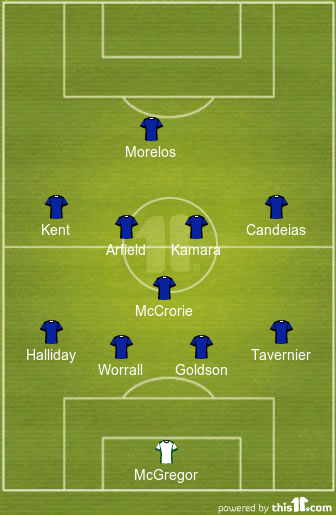