After a heart-breaking defeat in the Old Firm derby, Rangers will be aiming to get back to winning ways when they face Hearts at the Ibrox this Wednesday night.

Steven Gerrard’s men were slightly unlucky not to get anything from the game on Sunday. They played well but other than Ryan Kent’s ruthlessness, no one could finish off the chances.

With Alfredo Morelos and Andy Halliday getting sent off in the Derby, the manager will have loads of thinking to do before deciding on the line-up for the next game.

Morelos and Halliday won’t be featuring in this game as a result of their respective sending offs. Borna Barisic missed the Old Firm derby after picking up an injury in the international break. He is expected to be out for this game too.

The veteran is their first-choice keeper and should be in goal on Wednesday.

The captain’s sloppy pass allowed Celtic to score the winner, hence, Rangers fans would be hoping for the usual Tavernier to turn up against Hearts.

He has been a solid and regular presence at the back and should continue to be on Wednesday.

With Halliday suspended and Barisic out, we could see Joe Worrall playing at left-back. Hence, there is a chance for Katic to start at centre-back on Wednesday.

As mentioned above, Worrall could start at left-back amidst injury and suspension crisis to the other two players.

His miss came back to haunt Rangers in the derby. However, the past should be ignored and Jack must focus on holding the midfield together against Hearts.

The former Burnley man is expected to be in a slightly advanced midfield role on Wednesday.

He came off the bench against Celtic but the January signing should be back in the starting line-up against Hearts.

Candeias is a regular threat from the right-hand side to opposition defenders. He would be looking to add to his goal or assist tally on Wednesday.

With Morelos out, we could see Defoe leading the line against Hearts.

Scored a fantastic solo goal against Celtic that didn’t count for much at the end. The Liverpool loanee remains a key player in the team and should start on Wednesday. 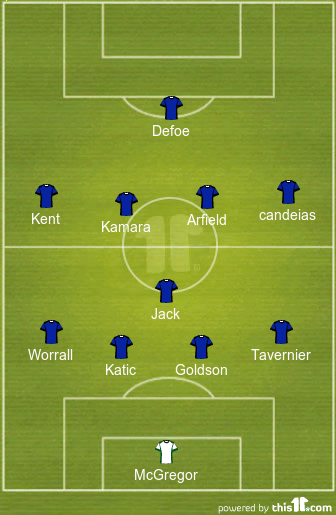