After thrashing KIlmarnock in the Scottish Cup in midweek, Rangers will be aiming to keep their form going when they face Hamilton in the league this Sunday.

Steven Gerrard’s men are currently second in the table, eight points behind leaders Celtic. Hence, if they are to have any chance of a shot at the title, then every game from now until the end of the season is a virtual must-win.

The Gers are up against a Hamilton side who are fighting to stay in the league, thus, we can expect a fight from the team that 11th in the table. (12 teams in the league)

Eros Grezda is few weeks away, while Graham Dorrans is back in training and may feature. Jami Murphy is out until late April.

The veteran was suspended for the last two games but should be back for this one.

The captain is a first-choice right-back and he starts most games. He would do so this weekend as well.

The former Brighton defender has had a decent season at the back and would continue to be at the heart of defence.

The youngster has done a good enough job alongside Goldson to keep his place in the team.

Borna Barisic started last weekend and in the midweek, hence, we could see a rotation here and Halliday to get his place back at left-back.

In terms of holding the midfield together, Jack has done a decent job at that. He should start in that role this weekend.

The experience of Davis would be required in a away game against a relegation-fighting team. He came on from the bench in midweek and should be fresh to start this game.

He came back from a slight dead leg and did well against Kilmarnock. Expect him to keep his place in the team.

The loanee from Liverpool has been a star man for Rangers out on the left wing. He is a certain starter in that position.

He was on fire providing three assists against Kilmarnock for Alfredo Morelos to score. The Portuguese winger would start this Sunday.

Came back from suspension and scored four goals in midweek. Hamilton defence would be vary of him this weekend. 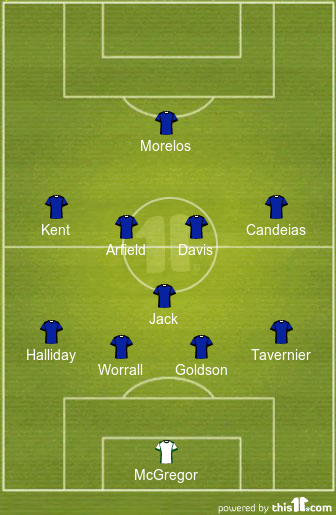