After finding their shooting boots in the previous two games, Rangers would be aiming to keep their form going when they face Dundee at the Ibrox on Wednesday in the Scottish Premiership.

The Gers are currently second in the league table, eight points behind leaders and defending champions, Celtic. If Steven Gerrard’s men are to have any chance of winning the title, they must win the remaining league games.

They are up against a Dundee side who are 10th in the table, just four points ahead of bottom-placed St. Mirren. Hence, on paper, Rangers should win this game at home, however, nothing is guaranteed in football.

Graham Dorrans is still not fit to get back into the team. Jamie Murphy is out until April and Eros Grezda is out for a few more weeks. Alfredo Morelos has completed his suspension and is in line for selection.

The veteran started the last game after completing the ban. He should do the same on Wednesday.

The captain has been in good form at right-back and starts every league game to lead the team from the back.

The former Brighton man has been one of the consistent centre-backs and should start the game on Wednesday.

The youngster has been doing well alongside Goldson and that partnership should continue in the upcoming games.

The Scotsman started the previous game and was decent at left-back. Expect him to keep his place on Wednesday.

Scored an absolute beauty in the last game and is a perfect player to sit in front of the centre-backs.

Another player who scored a beauty in the previous game and has been doing well in an advanced midfield role. The former Burnley man should keep his place in the team.

Came off the bench on Sunday and should get a chance to impress the manager on Wednesday.

The loanee from Liverpool is a star on the left wing. Gerrard would be hoping for more of the same in the coming weeks.

His assist-streak has been phenomenal in the past few games. The winger is doing a fantastic job and should keep his place in the team.

He is back from league suspension and should start this game. The last time the Colombian started for the Gers, he scored four in a Scottish cup game. 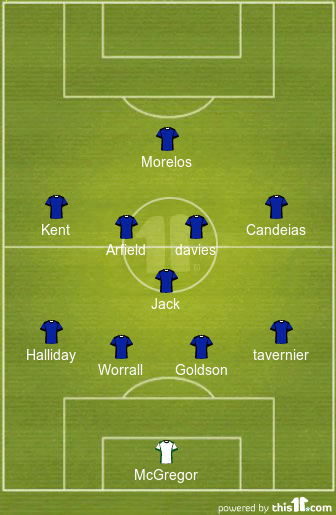