Leicester City welcome Tottenham to the King Power Stadium on Saturday as they look to bounce back to winning ways in the Premier League.

The Foxes have enjoyed a good start to the new Premier League campaign but suffered their first defeat at the hands of Manchester United on Saturday. However, it was a spirited performance from them and Brendan Rodgers would have taken a lot of positives from that game.

On the other hand, Tottenham have to negotiate a Champions League game against Olympiakos before Saturday’s exciting contest.

Rodgers has no fresh injury concerns ahead of the Spurs game.

Ricardo is one of the first names on the team sheet due to the qualities he brings to the team. He should keep his place.

Evans is an experienced and reliable presence at the back and will aim to keep the Tottenham attackers at bay.

Soyuncu was poor at Manchester United, conceding the penalty that turned out to be the hosts’ winner. The Turk will look to redeem himself with a solid performance against Spurs.

One of the best attacking left-backs in the division, Chilwell is expected to retain his place in the team.

Ndidi does the dirty work for his team, offering a layer of protection to the backline by breaking up the opposition’s play. He is one of the first names on Rodgers’ team sheet.

Gray was poor against Manchester United but he could get another chance to show his quality.

A creative player, Tielemans helps move the ball quickly and provides Leicester with the flair in the final third.

Choudhury is a tenacious midfielder who brings a lot of energy and industry to the Foxes’ midfield.

Maddison is one of the most exciting players in the Premier League. He has the potential to win games for his single-handedly and Rodgers will hope the Englishman weaves his magic against Tottenham.

Vardy has been in top form this season and will fancy his chances against a shaky Tottenham defence. 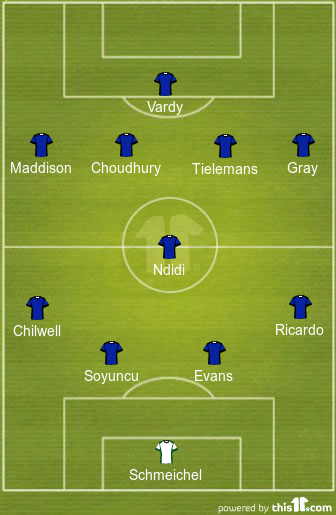