Leicester City travel to Bramall Lane to play Sheffield United on Saturday as Brendan Rodgers looks for his first win of the new Premier League season.

The Foxes produced a strong performance last weekend at Stamford Bridge as they held Chelsea to a 1-1 draw. Despite dominating the second half of the game, Rodgers would have been gutted to return home with just a point against the Blues.

Sheffield United, meanwhile, have made a brilliant start to life in the Premier League, picking up four points in the first two games. They beat Crystal Palace 1-0 at home last weekend and will be eager to produce something similar against Leicester City.

Ben Chilwell missed the Chelsea game with a groin problem but he’ll be fit in time to face Sheffield United.

Schmeichel is one of the best players in this Leicester City squad. He will continue in goal for this game.

Ricardo has nailed down his place in the team and is expected to continue at right-back.

Evans is an experienced customer who will be tasked to keep Billy Sharp quiet at the weekend.

Soyuncu is Rodgers’ first-choice central defender and his performance against Chelsea proved why he is worthy of a consistent starting berth.

Even if Chilwell recovers from his injury, Rodgers could persist with Fuchs at left-back following the veteran’s improved second-half showing at Chelsea.

After his mistake saw Chelsea score, Ndidi redeemed himself by scoring a bullet header. The defensive work he does make him such a crucial player for the Foxes.

With Sheffield United likes to play on the counter, Rodgers could go with Harvey Barnes on the left to exploit the spaces behind the wing-backs.

A classy operator of the ball, Maddison is Leicester’s main source of supply. He is an undoubted starter at Bramall Lane.

Tielemans had a hot and cold game at Chelsea. He’ll be keen to improve and produce a big performance at the weekend.

Just like Tielemans, Perez just couldn’t get on his stride last weekend. Yet, he is expected to be handed another start by Rodgers.

A fox in the box, Vardy will be keen to get on the score-sheet against United at Bramall Lane. 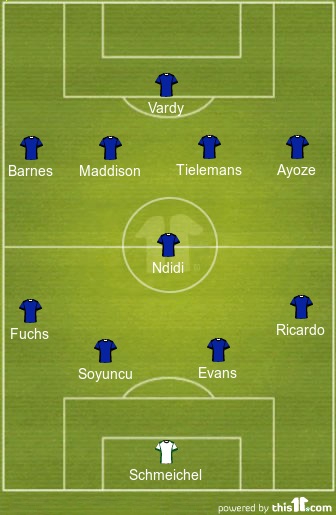