Leicester City will travel to Selhurst Park to face Crystal Palace on Sunday as Brendan Rodgers aims to make it three Premier League wins in a row.

The Foxes annihilated Southampton 9-0 last week, with both Ayoze Perez and Jamie Vardy bagging hat-tricks at the St. Mary’s. They built on that big victory by beating Burton 3-1 in the Carabao Cup round of 16 on Tuesday.

Meanwhile, Crystal Palace are also flying in the Premier League and will provide Rodgers’ Leicester with a firm test at the weekend.

Matty James is the only player out injured for the Foxes.

Schmeichel has started in all league games so far and is likely to keep his place in goal on Sunday as well.

An attacking right-back, Pereira offers a lot in the final third and works tirelessly off the ball. He should retain his place at right-back.

Evans has established himself in Rodgers’ team and will start at the heart of the defence.

Soyuncu has filled the void left by Harry Maguire, producing consistent displays and forming a solid partnership with Evans at the back.

Chilwell has established himself as the Foxes’ first-choice left-back and there’s no reason why he won’t start against Crystal Palace.

Ndidi is one of the best defensive midfielders in the league. He plays a crucial role in the Leicester side and is perhaps one of the first names on Rodgers’ team sheet.

With his blistering pace, movement and ability to run with the ball, Barnes could cause a lot of problems for Joel Ward on Sunday.

Tielemans is a lively player that helps keep Leicester ticking in the final third. He is likely to start at Selhurst Park.

One of the sought-after young English talents, Maddison will look to link up with players around him and open Palace up.

Scored a fantastic hat-trick in the 9-0 thrashing of Southampton and will be hungry to get on the score sheet at the weekend as well. Perez will start on the right flank.

Vardy has nine goals in 10 league games, including a hat-trick against Southampton last week. Going by his current form, the former England international will be too hot to handle for Palace defenders. 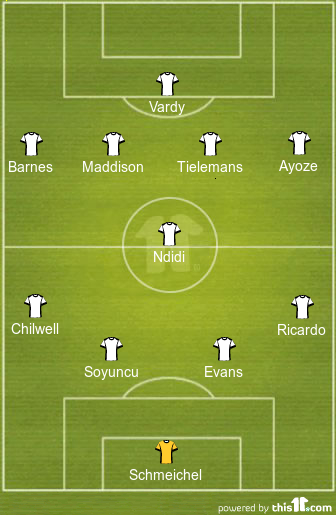