Leeds United are coming into this important fixture in the EFL Championship on the back of a hard-fought 1-0 victory over 7th-placed Bristol City as the Whites look to keep up the pace with Norwich at the top of the table.

They now face a challenging trip to the Madejski stadium which has always been a venue for some major upsets. With the hosts currently at 19th place and struggling to get clear of the relegation battle, this match should be in the bag for Leeds.

Knee injuries to star men Kemal Roofe and Adam Forshaw have meant that Leeds have had to really grind out wins in recent weeks and with the former expected to be out until April, they will have to look for alternative options.

The former Real Madrid man hasn’t covered himself in glory since making the switch across the continent but should start.

The 27-year-old Englishman is their only recognised right-back and he is expected to start this game against Reading.

The 28-year-old’s season has been filled with ups and downs and he will be looking to put an end to his inconsistent displays.

Very much the defensive commander of this talented Leeds side, Cooper’s defensive know-how warrants a place in the side.

The converted right-winger is a pacy proposition for the opponent to face and his attacking flair opens new avenues for Leeds.

The young Englishman has had a fairly effective season, having made 32 league appearances for the Whites and scoring twice.

The Spanish veteran has been crucial for Leeds this season and has scored some vital goals as well.

The Northern Ireland midfielder has only featured 18 times in the league this season and he could be in line to increase that.

This Polish attacking-midfielder has been in sensational form all season and his 35 appearances have produced 7 goals and 7 assists.

With the injury to Jack Clarke, a lot of the responsibility has fallen on the head of Jack Harrison and he has certainly lived up to billing.

The former Chelsea star has been in fine form in recent weeks and even scored the only goal in their recent 1-0 win over Bristol City. 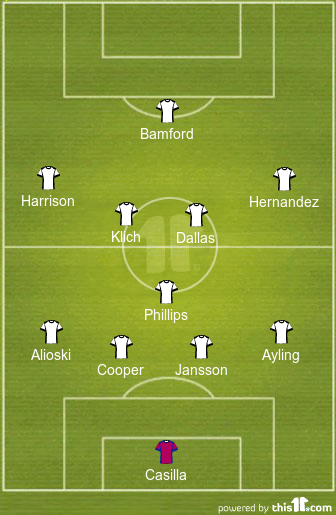