Leeds United welcome Middlesbrough to the Elland Road on Saturday, looking to make it five Championship wins on a bounce.

The Whites edged Reading on Tuesday via Jack Harrison’s late goal that keeps them in the automatic promotion places.

Middlesbrough, meanwhile, are placed 20th on the table after the latest round of fixtures.

Tyler Roberts was forced into an early substitution against Reading and is set to miss Saturday’s game. Eddie Nketiah has been out of the picture since the start of the month with an abdominal injury and will also miss the Middlesbrough game.

Meanwhile, Jamie Shackleton returned from injury on Tuesday as he came off the bench in the stoppage time against Reading.

The Spaniard is the club’s first-choice keeper and would be in goal for this game.

Ayling is a solid defender and while he started in a back three against Reading, he should return to his original position on Saturday.

White has been fantastic for Leeds so far this season. He will start in central defence as usual.

Alongside White, Cooper helped Leeds keep a clean sheet against Reading. He is one of the pillars of Bielsa’s defence and should start against Middlesbrough.

Dallas was one of the top performers in the victory over Reading. He is a certainty to start on Saturday.

Phillips is perhaps one of the first names on the team sheet. There’s no way Bielsa is going to leave him out of the starting XI against Boro.

Hernandez showed moments of magic against Reading but he is expected to do much more than that. However, the veteran Spaniard will keep his place in the team.

With Roberts injured, Alioski is likely to replace him in the engine room against Boro.

Klich couldn’t make much of an impact against Reading and was substituted in the second half. The Pole will be raring to improve and put in a solid performance at the weekend.

Scored the winner in the stoppage time against Reading to hand the Whites three precious points on Tuesday. Harrison deserves to keep his place on the left flank.

Bamford has been in good form of late and will lead Leeds’ attack on Saturday. 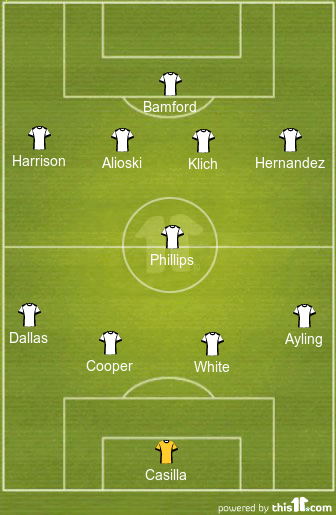