Leeds United welcome Cardiff City to the Elland Road on Saturday looking to continue their brilliant run of form in the Championship.

The Whites had to work hard to defeat Hull City on Tuesday. It was their seventh consecutive win in the Championship, with Marcelo Bielsa’s side overcoming Hull to move back to the top of the table.

Leeds are simply flying at the moment but they’ll be wary of Cardiff City, who have won three games on the bounce in the Championship.

Liam Cooper missed the game against Hull City with a calf problem and it isn’t clear when he will return to the fold. Jamie Shackleton picked up a fresh muscular injury after recovering from a hamstring problem and is likely to miss out again.

Adam Forshaw’s hip issue has lingered on, while Tyler Roberts is still out with a hamstring problem.

Casilla has been in excellent form this season, producing a couple of key saves against Hull on Tuesday. He’ll be keen to shut the shop on Saturday.

Ayling has done well in a back-three system of late but could find himself at right-back as Bielsa could go with a flat back-four against Cardiff.

One of Leeds’ best players this season, White will have to be at his best to keep the Cardiff attackers at bay.

With Cooper still injured, Berardi is expected to continue in defence.

Dallas produced an excellent one-on-one defensive display against the in-form Bowen on Tuesday. He’s a certainty to keep his place at left-back.

A clever player, Phillips is indispensable to Bielsa and that should see him retain his place in the holding role.

Harrison had a good game against Hull and will be aiming to continue his rich vein of form at the weekend.

Klich is a versatile midfielder who covers a lot of ground and helps the team a lot during transitions.

Hernandez is an intelligent player who can exploit little spaces behind the opposition backline. The Spaniard should keep his place in the team.

Costa’s direct running and ability to stretch defences make him a potent threat to the opposition. The on-loan winger from Wolves should start on the right flank.

Not only is he scoring goals and contributing to the play but Bamford is also making himself a menace for the opposition defenders in the box. He’ll lead the Leeds attack at the weekend. 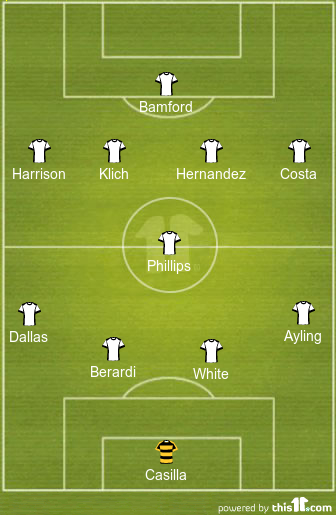