After suffering a bad defeat at the hands of Queens Park Rangers, Leeds United must be aiming to get back to winning ways when they face West Bromwich Albion this Friday night at the Elland Road.

Marcelo Bielsa’s men were below par at Loftus Road as they missed a chance to use the game in hand to reach the summit of the Championship. As a result, they are two points behind leaders Norwich City, having played the same number of matches.

They are now up against a West Brom side who lost their previous game but are only four points behind the automatic promotion places. Hence, this game is close to a six-pointer as teams seek to avoid the playoff muddle.

Kemar Roofe is not coming back soon from his knee injury. Adam Forshaw is expected to be back in training next week. Barry Douglas, Izzy Brown and Gaetano Berardi returned to the bench against QPR and are in contention for Friday.

He is their first-choice keeper since arriving in the January transfer window. Hence, the former Real Madrid man should start on Friday.

His form in the past few games is close to a sinewave plot. Leeds fans would be hoping for consistency from their right-back.

The Swede has had a good season but in the last two games, things haven’t seemed as smooth and he must improve quickly.

The captain has done well in the past few games and he would be hoping to keep a clean sheet on Friday.

He was back on the bench against QPR and should slot into the starting line-up on Friday.

The Englishman struggled a bit against QPR but he still remains the first-choice defensive midfielder in the team, partly because Forshaw is not involved.

His energy was a bit on the lower side on Tuesday. Bielsa would be expecting something better on Friday.

Tyler Roberts has struggled to make an impact in the attacking midfield role. Hence, Hernandez should come inside from his wide position.

With Douglas expected to be back at left-back, Alioski could be slotted back in the attacking role – on the left wing.

Jack Harrison is not cutting it when it comes to delivery and quality in the final third. Hence, Dallas must get a chance against West Brom.

He fed on scraps against QPR and couldn’t do much. Leeds players need to get their striker involved in the game to carve out more goal-scoring chances. 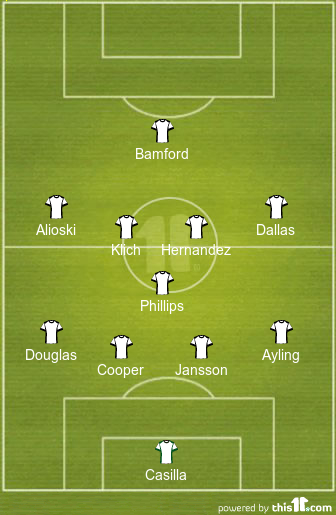