Leeds United will be aiming to continue their winning run when they face Sheffield United away from home at Bramall Lane this Saturday in the Championship. The Peacocks won their previous game against Reading when keeper Bailey Peacock-Farrell made a last-minute penalty save.

They are up against a Sheffield United team who are in good position in the table, just two points behind the Whites. Hence, this is a game of high importance in terms of who challenges league leaders Norwich City.

Patrick Bamford has returned from injury and is training, however, he won’t be included in the squad yet. Pontus Jansson is still a doubt and might not start on Saturday. Gaetano Berardi is a long-term absentee and Luke Ayling is out as well.

The youngster has had a mixed bag season but his last-minute penalty save could instill confidence for the upcoming games.

Scored the winner on Tuesday and looked much better in the full-back position. He continues to deputise for Ayling.

With Jansson expected to be out, Halme could be given an opportunity. Bielsa shouldn’t deploy Kalvin Phillips in central defence.

The captain needs to lead his side in a difficult away game. He has been solid in the past few games.

The signing of the season as far as Leeds are concerned. His threat in the final third and diligence are right up there with the best.

The Englishman is better off playing as a holding midfielder as it helps him control the game better.

He sat out the last few games but it is time for the Spaniard to start. Neither of Adam Forshaw or Lewis Baker did well when the opportunity arrived.

His energy has been present in every game. Starting alongside Saiz in the midfield would also help in terms of creating chances.

He continues to not perform well but the manager is handing him the opportunities. Hence, it is time the Macedonian starts showing what he is capable of.

The Spaniard’s quality in the wide attacking areas could be a key factor in how the game pans out this weekend.

Read More: Leeds’ goalkeeping woes would be over if they sign this 33-year-old experienced head in January

He works so hard on and off the ball to trouble the defenders. The Sheffield United centre-backs must keep an eye on him. 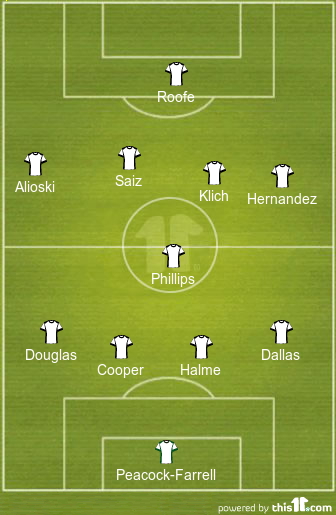