After a heartbreaking defeat at home to Sheffield United, Leeds United will be aiming to get back to winning ways when they face Millwall at Elland Road this Saturday.

Marcelo Bielsa’s men are currently third in the table, five points behind leaders Norwich City. Hence, if the title dream is to be kept alive, nothing other than a win would suffice for them.

They are up against a Millwall team who lost the FA Cup quarterfinals before the international break. But in league terms, they are just a point ahead of the drop zone. Hence, they would be giving their all to get points and be above the dreaded line.

Therefore, Leeds will have to be careful even though they are at home for this game.

Kiko Casilla received a straight red card against Sheffield United and is suspended for the next game. Pontus Jansson was expected to be out for three weeks with a knee injury but current update has him in contention to start against Millwall.

Kemar Roofe is close to a return but this week might be touch and go for him. Adam Forshaw is also in the same boat as Roofe in terms of recovery.

With Casilla suspended for this game, Peacock-Farrell will start in goal against Millwall.

He has been in decent form in the last few games, but more is expected from the right-back in the upcoming games.

He went out injured against Sheffield United but he is in contention to start against Millwall.

The captain would be buoyed after being named in the team of the season. He should be aiming to keep clean sheets and lead the team in the pressure-filled final run-in of the season.

Since being switched to left-back, Alioski has done well and he should keep his place in the team.

He too was named in the team of the season and is the first-choice defensive midfielder in the Leeds team. Hence, we should see him in action on Saturday.

Jack Harrison has been struggling to really influence games on the left wing. Thus, we could see Clarke starting ahead of the Manchester City loanee.

The Pole has played every league game this season and this weekend shouldn’t be any different.

He has improved in the last few games and is expected to start in midfield.

The experience of Hernandez will be key in the final lap of this season as Leeds aim to make the final push for promotion.

With Roofe for this game, Bamford is expected to lead the line on Saturday. 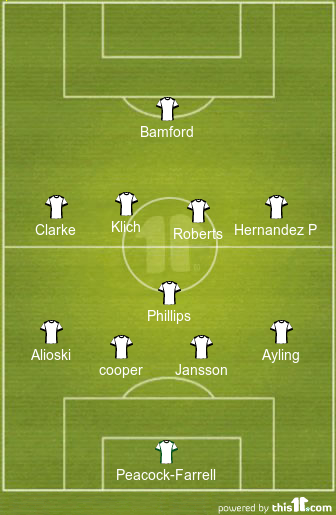