The Whites go into the weekend fixture on the back of a 2-0 success against Barnsley as they currently sit top of the Championship table after seven matches. So far, they look every inch like the pre-season favourites for promotion that they were billed as, but they are likely to face a stellar test against Derby.

Derby, meanwhile, are currently sitting in 19th place on seven points and have not tasted victory in the Championship since the opening day of the season.

Adam Forshaw missed the win over Barnsley with a minor hip problem but is expected to be fit ahead of the Derby clash.

Luke Ayling is building his fitness with the Leeds Under-23s and it’s only a matter of time before he becomes a part of the first-team squad.

Casilla has been in top form this season and deserves to keep his place in goal for Leeds United.

An attacking full-back, Dallas likes to bomb up and down on the right flank throughout the game. He is likely to retain his place in the team.

White has been solid at the back for the Peacocks and is expected to start on Saturday.

The skipper will have to marshal his troops well as well as deliver a strong performance to help Leeds get all three points against Derby.

Alioski seems to have nailed down a place at left-back ahead of Douglas. It is the Macedonian’s attacking qualities that make him such a dangerous customer down the left.

One of the first names on Bielsa’s team sheet, Phillips is a top midfielder who protects the backline with his tacking and reading of the game. He is an undoubted starter against the Rams.

Hernandez brings a lot of creativity and flair to the Leeds attack. He should start on the right flank.

Shackleton started in midfield against Barnsley at the weekend in Forshaw’s absence. However, with Forshaw likely to be fit, Shackleton could make way for the ex-Middlesbrough man on Saturday.

Klich will be eager to get on the score-sheet again after scoring the penalty in the 2-0 victory over Barnsley.

Despite being subpar so far this campaign, Bielsa has kept his trust with Harrison and that is unlikely to change against Derby as well.

Bamford has impressed with his hold-up play this season and is expected to lead the Whites’ attack on Saturday at Elland Road. 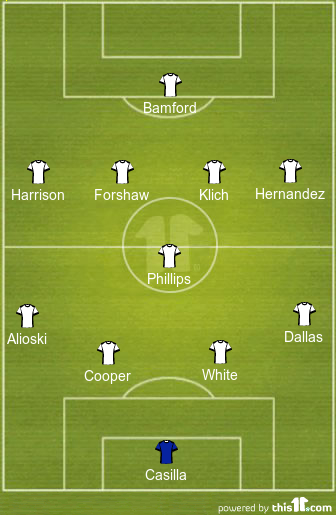