Leeds United under Marcelo Bielsa have had a perfect start to the league campaign, winning both the games played so far, to signal the intentions of promotion this year. The Peacocks laid down a marker when they went to Derby County and comfortably beat them 4-1.

However, with the high-intensity style of play adopted by Bielsa and his team, there is a massive chance that a rotated line-up could take part in the League cup tie against Bolton Wanderers. The manager might also take a close look at some of the young players from the fringes or the academy.

There are no injury concerns for Leeds but there should be rotation in the line-up due to the type of football they play – tough to resist for a long season. So, the likes of Samuel Saiz, Kemar Roofe, Luke Ayling, etc. might get a rest for this game.

The loanee from Chelsea will surely get a chance to showcase his talent in this cup tie.

The academy graduate has been in the squad for the two league games and might now get his opportunity to start.

Another youngster who might start and showcase his talent. If he performs well, Bielsa will have an extra option in defence.

Cooper may just keep his place in the starting line-up despite playing both games, in order to add experience to the back-line.

Pearce is a Leeds academy graduate and will look to make a mark in the first-team, replacing an in-form Barry Douglas.

Phillips has done a good job thus far and should keep his place, shielding a relatively young defence.

Klich has been superb for the Peacocks and might not get a rest for this game.

Samuel Saiz has been inspirational so far and will most certainly get a game off, hence, it will be an opportunity for Baker to show his worth.

Alioski will start this game and continue his good work done this season so far.

The teenager should get a chance if Pablo Hernandez gets a rest. He must make sure he grabs this opportunity with both hands.

Read More: Bad move by Bielsa? Why losing 20-year-old for £6.2m could come back to haunt Leeds United

Bamford should lead the line with Kemar Roofe getting a well deserved rest. 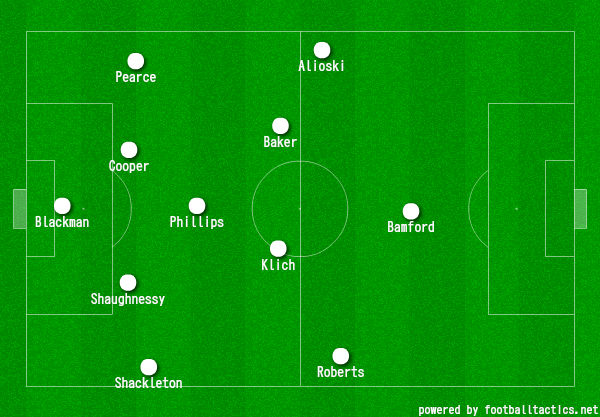