Predicted Leeds United line-up to face Bolton in the Championship

Leeds United will be aiming to make it five wins on the spin when they face Bolton Wanderers in the Championship this Saturday. Marcelo Bielsa’s men are currently second in the table, just a point behind leaders Norwich City. They scraped past Wigan 2-1 last weekend and cemented their place at second place.

The Peacocks are up against a Bolton team who are on a free fall at the moment. The Wanderers haven’t won a league game since the end of September, which is clearly a long time back.

His confidence has been boosted in the past few weeks, especially after a last-minute penalty save against Reading. He needs to perform well though, with Leeds not having an adequate back up right now.

With Dallas and Ayling out, there is no option for Bielsa but to start with the young Shackleton at right-back, just like last week.

The Swede needs to be the leader of a young defence and guide them through a period of games where the pressure will be high.

It would be better to see Halme start as centre-back with Kalvin Phillips returning to defensive midfield.

He is probably the signing of the season so far and should continue to keep his performance level up.

Rather than operating in central defence, the Englishman is better off controlling the midfield by playing as a number six.

The Pole has been energetic in his displays throughout this season and is also adding the final product to his game.

The Spaniard was back in the line-up last weekend after a spell on the bench. Leeds need him to be involved in the build-up play to create more chances.

The experienced Hernandez always contributes positively and remains a key figure in the wide areas.

Bielsa has given the Macedonian a lot of opportunities without really getting much out of him. The latter needs to step up now.

Scored a brace last week and looked in good touch. Leeds would do well with Roofe in form for the rest of this season. 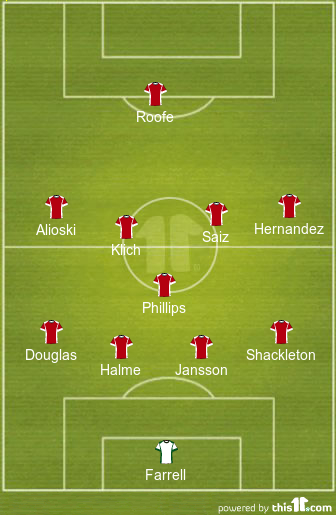