Predicted Aston Villa line-up to face Brentford in the Championship

After playing out that crazy 3-3 draw against Sheffield United, in which they scored three in the last 10 minutes, Aston Villa will be aiming to get back to winning ways when they face Brentford at Griffin Park this Wednesday.

Dean Smith’s men were three goals down against the Blades, but they somehow managed to score three and gain a point from the jaws of a bad defeat. Next up, they are against a Brentford side who lost to Nottingham Forest and are hovering around the relegation zone.

Jack Grealish’s return date has been extended and we could see him in action by the end of this month. Axel Tuanzebe has a metatarsal injury and is out until mid-March. James Chester has had knee problems and we might see him against Brentford. Henri Lansbury has a hamstring issue and is out.

He is the team’s first-choice keeper and is expected to start every league game. The Croat was a little unfortunate to concede against Sheffield United.

Neil Taylor got caught way too many times in the last game at left-back, hence, we may see Alan Hutton switched to that side, meaning Elmohamady may get a go at right-back.

He has had a good impact since returning to the club last month. The centre-back will be aiming to keep more clean sheets.

His header sparked the comeback against Sheffield United. The loanee from Bournemouth has done well at the back and could deputise for Chester, who is struggling with his swollen knee.

As mentioned above, Hutton could play at left-back on Wednesday.

The veteran did well when sent on against Sheffield United. Expect the former Stoke City man to start in defensive midfield against Brentford.

He had a quiet game last time out and Dean Smith would be hoping for more in the coming games.

The Scot has been Villa’s best midfielder this season and his performance level remains consistent. He is probably the first name on the team sheet.

Scored the dramatic injury-time equaliser on Saturday and should start ahead of Jonathan Kodjia in this game. The latter just didn’t have any impact against Chris Wilder’s men.

The Dutchman would need to improve his performance level in order to keep his place in the team. He may get another chance to prove his worth.

Read More: Aston Villa capturing this out-of-contract Championship star in the summer will be a stroke of genius by Dean Smith

The loanee from Chelsea has been scoring consistently and is a certain starter up front for the Villans. 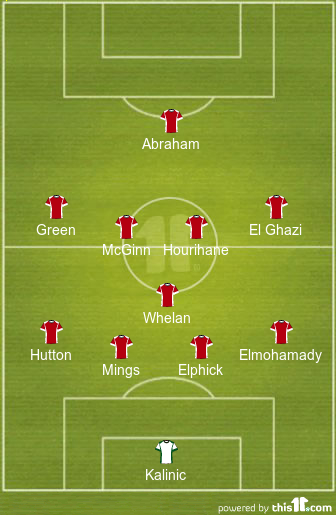