Aston Villa will be aiming to continue their recently found good form when they face Blackburn Rovers at Villa Park this Saturday. Dean Smith’s men won four consecutive games before the international break and found their way to sixth place in the table.

They are up against a Blackburn team who are in and out of form and find themselves at 17th place in the table. Hence, on paper, Villa this game covered but nothing can be taken for granted in Championship football.

James Chester is close to a return but this weekend would come too soon. Henri Lansbury is back in training and could be in the squad for this game. Tammy Abraham is closing in on a return from a calf injury. Orjan Nyland is out for the season.

Since returning from the loan spell, Steer has been starting in goal for Villa and should do so this weekend.

With Hutton out for this game, Elmohamady, who played well against Middlesbrough a fortnight ago, should get a chance at right-back.

The on-loan defender from Wolves did well against Boro and is expected to get another go in central defence this weekend.

With Elphick out and Chester a doubt, Mings is certain to partner Hause in central defence.

The Welshman has stepped up his performances in the last few weeks and has marked his place in the team.

The veteran does a decent job in defensive midfield and his experience would be key in the final few games of this season.

The youngster wasn’t at his best last time around but he is a good prospect and should get more opportunities to prove his worth.

He is one of the star players in the Villa team and probably the first name on the team sheet.

The playmaker has been in great form since returning from injury and is expected to start in central attacking midfield.

He was pretty good against Boro and Villa fans would be hoping for more of the same against Blackburn.

Abraham was subbed off injured in the previous game and pulled out of the England U21 games. Hence, we could see Kodjia leading the line this weekend. 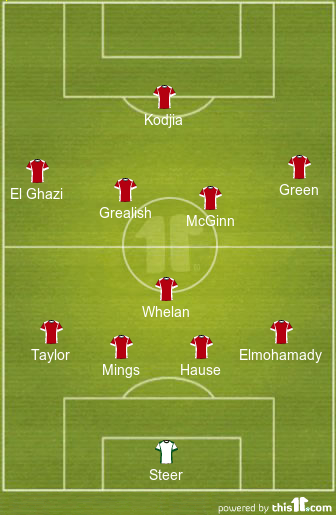