Predicted Tottenham line-up to face Southampton in the Premier League

Tottenham Hotspur were rocked by Arsenal at the Emirates Stadium as the Gunners came from behind to pick up a 4-2 victory in the Premier League this weekend. Spurs will be disappointed with the poor defending and Mauricio Pochettino will be hoping for a strong return against Southampton.

The Saints pulled off a 2-2 draw against Manchester United in the league and seem to be getting better at the moment. Spurs have now dropped out of top-four and should be aiming for nothing but a win.

Tottenham have a number of stars out injured and will probably not be able to rotate as much as the other teams. Defender Jan Vertonghen is also set to miss out after picking up a red card against Arsenal in the last game. Mousa Dembele, Davinson Sanchez, Erik Lamela and Kieran Trippier are all out injured as well.

Was completely beaten by the the Arsenal players and the Frenchman was unable to keep out most that came his way. He should retain his place though.

He was poor against Arsenal and failed to make an impact going forward. Aurier was troubled at the back too.

Foyth should keep his place given Vertonghen is out suspended for this game. The youngster lacks a certain composure at the back.

Spurs missed Alderweireld against the Gunners given he has been their best defender this season. He will start this one for sure.

Davies too had a poor outing against their North London rivals who constantly troubled him at the back.

Dier scored against the Gunners and looked energetic. He should keep his place for this game.

Winks will take the place of Moussa Sissoko in this game and aim to swiftly move the ball in the middle of the park.

Eriksen is proving to be vital after returning from injury. He has picked up assists in both of his last two games.

Moura should start this game in place of Dele Alli and cause all sorts of problems with his dribbling on the ball.

Son seems to be in good form at the moment and has shown good work rate. He will keep his place.

Kane scored a hat-trick in this fixture last season and will be aiming for a similar outing this time out as well. 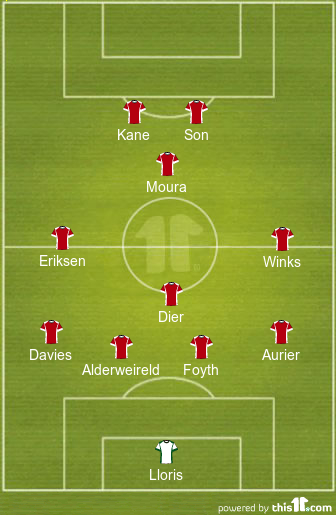