Tottenham Hotspur picked up an important victory against Leicester City in the league last weekend. They also ensured progress to the round of 16 in the Champions League after drawing against Barcelona.

Mauricio Pochettino will now turn his attention to the home clash against Burnley in the Premier League this weekend. The Clarets did pick up a good win last time out as well and have looked better in recent weeks. Spurs will definitely aim to pick up another win and further cement their place in the top four.

Mousa Dembele, Davinson Sanchez, Kieran Trippier, Serge Aurier and Victor Wanyama are all out injured and will miss this clash. Pochettino has to make do with his current crop of players. However, Erik Lamela is back and is fit to start this game.

The Frenchman did well against Barcelona and will keep his place between the sticks.

The youngster did well after receiving his first Champions League start. He should continue in this game as well with both Trippier and Aurier out injured.

The Belgian will continue at centre-back. He has been their spine in defence so far.

Veronghen’s return from injury has definitely helped tighten things up at the back for Tottenham. He will start this game alongside Alderweireld.

Davies could return to the line-up in place of Danny Rose for this game. The Welshman has done well in the last two weeks.

Dier should take the place of Harry Winks and dictate the play in the middle of the park.

Sissoko has looked a refreshed player this season. His work rate has been brilliant.

The Dane has been in brilliant form over the last few weeks. He is their main source of supply in the midfield.

Always a pest for defenders to deal with, Alli will continue in central attacking midfield.

Son has been a potent weapon in front of the goal over the last few weeks. He should continue to lead the line.

The England captain will surely start this one after sitting out against Leicester City. He will be aiming to get back amongst the goals. 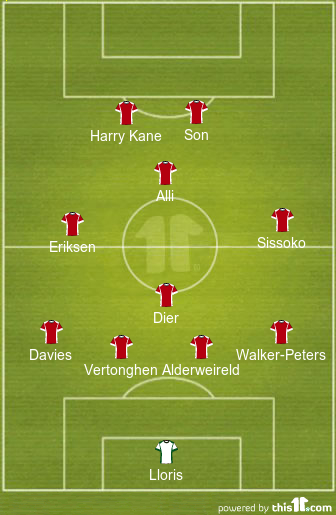