Wolves head to Slovakia on Thursday for a crunch Europa League clash against Slovan Bratislava.

The Wanderers sit third in Group K, having claimed a surprise victory at Besiktas last time out. They were held to a 1-1 draw by Southampton at the Molineux on Saturday and Nuno Espirito Santo will be aiming to get back to winning ways on Thursday.

However, Nuno will be wary of Slovan Bratislava as they are on top form right now.

Ryan Bennett and Ruben Neves were forced off with injury against Southampton and are unlikely to be fit for the trip to Slovakia.

Romain Saiss is out with a thigh injury and his date of return remains unclear as of now.

Patricio is Wolves’ undisputed No.1 and he should start against Slovan Bratislava on Thursday.

Traore seems to have found a new home at right wing-back. The pacey Spaniard is a certain starter in Slovakia.

Vallejo looked very shaky after replacing the injured Bennett against Southampton. The Spaniard will be eager to improve and put in a solid performance in the upcoming game.

A leader at the back, Coady will have to be at the top of his game to keep the hosts’ attackers at bay.

Boly has looked pretty commanding at the heart of the defence in the last few games and he is likely to be amongst the starters once again on Thursday.

With Jonny having enjoyed a run out against Southampton at the weekend, Nuno could go with Vinagre at left wing-back in the Europa League clash.

The Portuguese veteran adds creativity to the side with his incisive passing. He should keep his place in the team.

Dendoncker could operate from a slightly deeper role in midfield on Thursday. The hulky Belgian will be tasked with cutting out the opposition attacks.

With Neves unlikely to be fit, there would be a no better chance for Gibbs-White to make a mark in the team. The youngster needs game time to showcase his talent and class.

Cutrone has shown some excellent attributes so far, with his overall hold up play and also his movement in the box looking top-notch. He’s likely to keep his place in the team.

One of the first names on the team sheet, Jimenez is the Wanderers’ chief source for goals. The Mexican has six goals in eight Europa League games this season and must start once again for Nuno’s side. 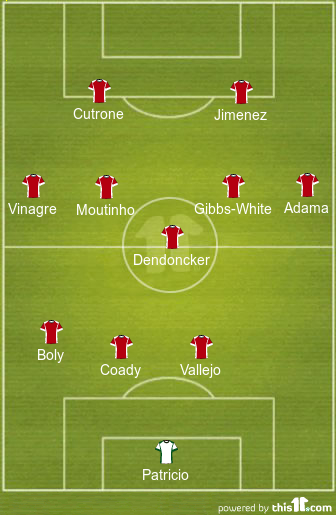