Wolves are back at home as they welcome Manchester United at the Molineux on Monday in the Premier League.

After drawing 0-0 with Leicester City in their season opener last week, Wolves qualified for the Europa League play-off by beating Armenian club Pyunik 4-0 at home on Thursday, 8-0 on aggregate.

Nuno Espirito Santo’s side gave a tough time to Manchester United at The Molineux last season, dumping Ole Gunnar Solskjaer’s side out of the quarter-finals in the FA Cup before defeating them 2-1 in the Premier League.

Wolves have no injury concerns ahead of the game on Monday.

Patricio is Wolves’ undisputed no.1 and he should start against Manchester United on Monday.

Doherty was one of Wolves’ best players last season as he provided a brilliant balance between the attack and the defence. He is a certainty to start the forthcoming game.

A rock at the back, Coady is expected to lead the backline against Manchester United.

Bennett will have to be at his best to stop United’s pacey forwards at the Molineux.

Boly has been a vital cog for Wolves with the way in which they play with three at the back.

The Spaniard did very well in his debut season in England and will be preferred ahead of Vinagre at left wing-back.

Moutinho brings creativity and experience to this Wolves side. He is a definite starter against Solskjaer’s side.

A classy operator of the ball, Neves excels with his ability to break up play and initiate attacks from a deeper position in midfield. He’ll be tasked to keep Pogba quiet.

With his burst of pace and movement, Jota can be a tricky customer for United’s defenders.

The Mexican international enjoyed a brilliant debut season in the Premier League. He’ll be looking to make a difference against United on Monday. 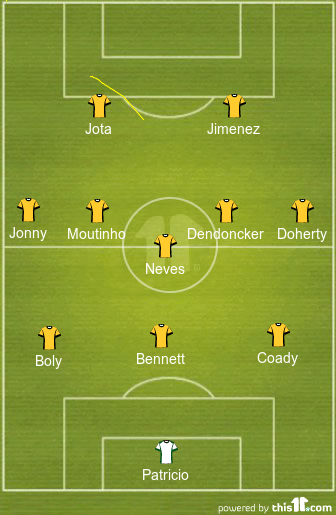