Southampton are coming into this important fixture against the Gunners in the back of a disappointing 2-1 home defeat at the hands of fellow strugglers Cardiff City. Ralph Hasenhuttl’s men must bounce back from this defeat when they travel to the Emirates to face an upbeat Gunners outfit.

They will be hoping the repeat the events of the reverse fixture against the Gunners thanks to goals from Shane Long and Charlie Austin. Currently in 18th place, getting at least a point off this Arsenal side is absolutely essential to Hasenhuttl at this point.

Michael Obafemi and veteran forward Danny Ings are both doubts for this fixture as they are still in the midst of recoveries from recent thing injuries. Although the former is close to returning, he isn’t expected to feature in this match.

Mario Lemina has suffered an abdomen injury that is scheduled to keep him out of action at least until the start of March. Also, Stuart Armstrong is also unavailable for this fixture after picking up a leg injury.

The Englishman has been in good form between the sticks for the Saints this term and has singlehandedly saved them from losing situations.

Since the departure of right-back Cedric Soares to Inter in January, Valery has really come to the fore for Southampton.

The 22 year old center-back has really improved under Ralph Hasenhuttl, playing in 15 games with a large majority since the Austrian took over.

Easily one of Southampton’s best players this season, the Danish center-back will keep his place baring something major.

A player who is now classed as a Saints veteran, his defensive contribution in the absence of Maya Yoshida have been very good

The former Champions League winner with Chelsea, Bertrand has become one of the Saints’ most potent attacking threats.

The former Bayern Munich prodigy, his contributions from midfield have been invaluable to since Hasenhuttl’s takeover.

A product of the famous La Masia youth academy, the former Chelsea man has made the starting role his own at St.Mary’s.

A versatile midfield player capable of being deployed anywhere across the front line as well, his passing and set-piece abilities will be crucial.

Another Premier League veteran in the Southampton ranks, his goalscoring instincts and work-rate will be important against the Gunners.

The English speedster has been in fine form over the last couple of months and has scored some key goals for the Saints. 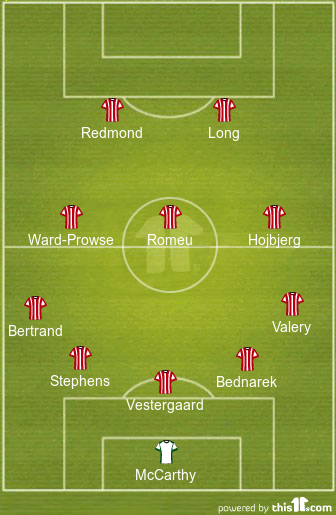