Predicted Middlesbrough line-up to face Ipswich Town in the Championship

After getting defeated by Sheffield Wednesday on Boxing Day, Middlesbrough will be aiming to get back to winning ways when they face Ipswich Town at Teesside this Saturday. Tony Pulis’ men lost at home to the Owls, pushing them down to fifth position in the table, nine points behind the automatic promotion places and two clear for the playoff spots.

They are up against an Ipswich side who are bottom in the standings and desperate for any positivity around under new manager Paul Lambert. Hence, The Tractor Boys will be doing everything on their might to get something out of the upcoming game. That, in turn, won’t make it easy for Boro.

Ryan Shotton was ruled out for the Boxing Day game and it seems like he will miss this game as well. Rudy Gestede and Same McQueen are other absentees in the squad.

Randolph has been pretty good this season, which indicates the fact that his team has needed him to come good more often than not. He starts every league game.

The experience of Ayala at the back is a primary requirement for this team.

Missed a good chance in the last game to put his team ahead. Other than that, he is a solid presence at the back and continues to be.

He has had a fantastic season so far but could have done better to stop the Wednesday goal. Pulis would want an improved display from him.

With Shotton expected to be out for this game as well, expect McNair to continue playing at right wing-back.

The skipper always gives his best for the team and pushes them forward. He needs to lead his team for the upcoming games because the results haven’t been great lately.

He needs to do more in the midfield in order to impact the games. As of now, Howson is working hard without much end product.

Clayton wasn’t able to dictate the game enough on Wednesday. He should do that on Saturday and help his team going forward.

Besic hasn’t been influential in the past two or three games. With Lewis Wing waiting on the bench, the former must do well in this game or risk losing his place.

It is time now for Pulis to start with Hugill as a support man for Assombalonga. It will help the team to be a threat to the opposition.

Read More: Get him Pulis – This Crystal Palace star’s thorough experience could be Middlesbrough’s key to promotion

He has been isolated in the past couple of games, meaning the striker isn’t able to impact games. If Hugill starts with him, the partnership may conjure up something. 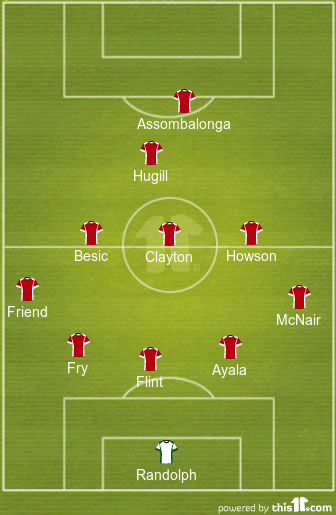